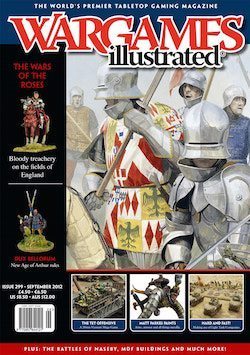 Bloody treachery on the fields of England We kick off our Wars of the Roses theme with an introduction to gaming the confl ict by rules writer Simon MacDowall. He takes us through raising armies, troops types, organisation and more. All accompanied by Neil Smith’s brief history of the wars.   Shine a light An introduction to object source lighting – a painting technique used to create the illusion of light.   Slaughter in the snow: the battle of Towton, 1461 For our coverage of ‘England’s bloodiest battle’ we asked two gamers to tell us about their Towton projects – one in 15mm, the other 28mm. Both of them went on very different journeys and reveal here the trials and tribulations along the way.   Dux Bellorum Just in time for the release of Dan Mersey’s ‘Age of Arthur’ wargames rules from Osprey, we catch up with the author for an interview about the rules.   Attack of the trap Ezoids Well-known painter David Imrie (aka Saxon Dog) has painted up some Wars of the Roses mercenaries to complement our other theme articles. In addition to telling us how he goes about his painting, he shows us his trapezoids!   Stormbirds Few planes in history have changedeverything we had previously understood. The Messerschmitt 262 was one such aircraft. In this article the Battlefront Studios guys give us the history behind, and a painting guide for the ME262.   Now is the conclusion of our Discontent: the battle of Bosworth, 1485 We wrap up our theme content for this month with a re-fi ght of the ‘biggy’ of the Wars of the Roses – Bosworth Field – using the Clash of Empires rules. “God and your arms be prais’d, the bloody dog is dead” or is he…?   The Battle of Naseby, 1645 Steve Danes, enthusiastic wargamer, rules writer and ECW buff, recently ran a games for his mates at one of our favourite wargaming locales – Ugley Hougoumont. Here’s the tale of the battle they fought.   Hard and Fast With the release of the Devil’s Charge; the new Flames Of War source book covering the first part of the Battle of the Bulge, players now have the option to field an American Light Tank Company. In this article Bede Bailey shows us how to make good use of them in the game.   Nam. mega-game You won’t ever see a better 28mm Vietnam game than this! Follow the action as eight players battle it out for control of a border zone during the Tet Offensive of 1968.   Matt Parkes paints: Metallics Matt tells us how to get our armour nice and shiny, and ready for the tabletop.
If you are seeing this message after signing in, PLEASE PRESS THE BROWSER REFRESH BUTTON