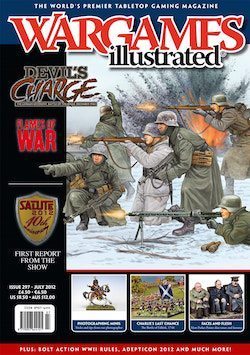 Peiper’s charge The quintessential image of the Battle of the Bulge is that of a line of German King Tigers with Fallschirmjäger troops riding atop and Jochen Peiper pushing them forward with words of ‘encouragement’. With the release of the Flames Of War Devil’s Charge supplement it is now possible to refight this epic story, using this epic scenario!   Salute 2012 Europe’s largest wargames show has been and gone for another year. In this report we feature some of the prize winning games and bring you the biggest news from the London 2012 event.   Victor’s charge  Who wouldn’t want to command 4,000 points of some of the best equipment Germany has to offer all of the way to the Meuse? Or failing that, do what they can to help put an end to Peiper’s seemingly unstoppable charge with some of the best troops in the American army? In this battle report Flames Of War writers Victor and Mike do just that.   Matt Parkes Paints : Faces and Skin Our resident super-painter Matt Parkes tackles the subjects that baffle e many wargamers when it comes to decorating their miniatures – skin tones and characterful faces. From the basics of three-stage highlighting, through painting eyes, to details like stubble, and black eyes, Matt presents it all in digestible chunks.   Charlie’s last chance Following on from the theme of the last issue of Wargames Illustrated, Andrew Bamford and Rick Priestley bring us the history and a battlereport on the last Jacobite victory of the 1745-46 rebellion – the Battle of Falkirk.   Bolt action! We always strive to bring you reports on the biggest wargames rules releases, this month we ask writer Rick Priestley to tell us about the forthcoming WWII rules from Warlord Games and Osprey.   Adepticon 2012 Our US reporter traveled to Chicago, Illinois, to bring you some shots of the rapidly growing historical gaming at the event that hosts the world’s largest Warhammer 40K tournament.   Wolves guarding the flock Taking a look at the Illyrian Revolt of 6-9 AD, J.P. Chapleau not only recounts the history, but also provides a lot of great ideas for how to build an army of the Roman legions or the dissenting Illyrian tribes and their allies.   Wargaming in the classroom John Michael Priest, long-time teacher and wargamer, tells us about his experiences using a ruleset he developed to get his students involved in learning more about the American Civil War and the problems faced by the generals in the field.   Wabash-ing The Battle of Wabash, 1791, was the native Americans greatest victory over the US Army. Grahame Burke
If you are seeing this message after signing in, PLEASE PRESS THE BROWSER REFRESH BUTTON