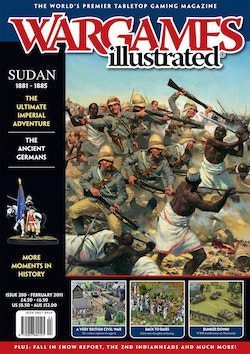 More moments in history With the third set of our Wargames Illustrated exclusive ‘Moments in History’ range about to be released, we wanted to give you a closer look at the vignettes, and the moments that inspired them.   “Give them volleys!” We begin our expedition to the Sudan with an introduction to the Mahdist Uprising of 1884 – 85. “Give them volleys!” is a quote by Lieut. Col. Percy Barrow, barked to his men at the battle of Abu Kru, and we felt it was a great soundbite which summed up both the attitude, and determination, of a colonial army facing a “savage” foe in the far flung reaches of the Empire. In this intro article you will find all the background information you will need before setting out on a campaign into the desert, or conversely, in preparation to face the foreign infidels who are invading your sacred homeland.   Bunker Down! Mike Haught discusses the construction of, and tactics for using, WWII Western Front defences in Flames of War.   Circling the Square Our theme content continues with more details on the campaign to save General Gordon besieged in Khartoum, along with a scenario for refighting the Battle of Abu Klea, 1885 – one of the the key encounters of the Mahdist Uprising.   The Tribes of Germania By bringing together classic sources and information from modern archeological finds, Howard Whitehouse can paint us a clearer picture of the great threat to Rome, the Ancient Germans.   A good dusting   Author and wargamer David Bickley explains the lure of the Sudan. His recently released book, A Good Dusting, provides gamers with rules for refighting the battles of the Mahdist Uprising, and David gives us a designer’s eye-view on how and why he put the rules together.   Back to bases When you have finished meticulously mounting your models on bases, preparing them for the tabletop, do they actually look like the units/regiments/warbands of the past which they are designed to represent? Pete Brown argues not, and presents the case for radical change. The WI modelling team take up some of Pete’s ideas and run with them. Take a look at the results….   Unfinished business In light of the failure to save Khartoum and Gordon, the British government responded by re-opening another front in the Sudan in an effort to inflict retribution on the Mahdi’s chief lieutenant, Osman Digna. The campaign proved ultimately futile, but one of its battles, Tofrek, is rich with wargaming potential.   Second to none First
If you are seeing this message after signing in, PLEASE PRESS THE BROWSER REFRESH BUTTON