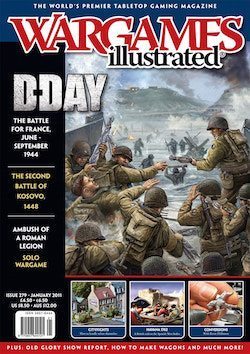 D-day: The allied invasion of France Setting the scene for this month’s theme we present a brief guide the the largest amphibious landing in history, and its aim to bring victory to the Allies.   No mean streets Pete Brown introduces us to some of the innovative ways his local club tackles wargaming in an urban environment.   Eight Armies In Normandy It is June, 1944, and the Allies are landing on the Normandy Beaches – directly into the teeth of the German fortifications. The paratroopers have dropped inland and are making their way to the coast, engaging German units as they encounter them. ‘Eight Armies in Normandy’ is a largescale Flames of War game played by Battlefront Miniatures staff to celebrate the launch of the newest Normandy books.   The fall of the fourteenth The “typical” image of a wargame might be a group of friends gathered around a table, beers in hand. Sometimes all you have are the figures, table, and beers. Chris Hahn provides us with a “solo wargamer” take on the loss of a Roman legion.   Lepkowski’s Prison Break The Brasprats Raid, 16 August 1944; a daring World War II German mission to rescue 130 Fallschirmjäger prisoners. All the background and gaming details you need for re-fighting the raid.   Havana 1762 Author David Greentree gives us the wargaming angle on his new Osprey book – A Far Flung Gamble.   Great warriors: Polish Hussars Our Great Warriors series continues with a look at Polish Winged Hussars. the second battle of   Kosovo, 1448 With Steward Hunyadi Janos at the reins in 1448, the mighty Hungarian army attempted to stop the spread of the Ottomans in the Balkan Peninsula. John Bianchi explains how all did not go as he had planned.   How to build wagons Paul Davies brings us another great modeling article that will help you bring your baggage trains to life. Not only are wagons essential to military campaigns, but they make great targets for all manner of gaming scenarios.   Old glory Worlds show report The ‘Derby’ show’(as it is affectionately known) always produces some nice looking games, and 2010 was no exception. Lots of demo game photos for you to enjoy.   An army in sprays Three hundred English Civil War figures from bare plastic to fully painted in ten evenings! Is it possible? Find out here….   Little men, big games Running a big game at a wargames show or event can be incredibly daunting the first time around. Chris Pramas provides us
If you are seeing this message after signing in, PLEASE PRESS THE BROWSER REFRESH BUTTON