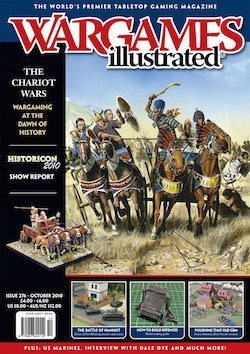 Begetting and Smiting It was all Yul Brynner’s fault! That’s the conclusion of Jim Graham as he tries to pinpoint who’s to blame for his fascination with wargaming in the Chariot Wars era. Jim goes on to outline the development of the chariot and introduces us to some of the nations and places which feature in other Chariot Wars articles this month. Polishing that old gem John Desch takes us on a journey through one of the most time-honored traditions of wargaming, tinkering with a favorite scenario to make it fit a new ruleset. In this case a battle from the Franco-Prussian War, with Black Powder as the targeted rule set. The Armies of Sumer and Akkad The Sumerians and Akkadians sit on the very edge of recorded human history. In this article we give a detailed account of the Sumerians as a warrior nation and examine their chariots (or rather battlecarts)as a wargaming weapon. Great Warriors: US Marines This month. in our irregular series “Great Warriors”, we profile the U.S. Marines, focusing on their actions during WWII. Interview with Dale Dye Captain Dale Dye, USMC (Ret.), has made a name for himself bringing realism to the military history portrayed by Hollywood. At HISTORICON this year, Capt. Dye spoke to HistoryNet.com and we have the first part of the interview here for you. The Battle of Megiddo, 1457BC Enter the New Kingdom Egyptians; the archetypal Chariot Wars force. Three thousand chariots clash near the city of Megiddo. As well as background information you will find a scenario for refighting this epic encounter. The Taranaki War AKA The Second Maori War. Following a decade of relative peace since the end of the First Maori War (covered in WI274) conflict again erupted in the Land of the Long White Cloud, and again the occupying British forces were sorely tested by the local resistance. Modelling Chariots In the course of preparing our Chariot Wars content we thought it only right to construct our own miniature chariot, and give you the rundown of the research and practical modelling techniques involved. Recon by combat Using first hand accounts from two Russian soldiers on the Eastern Front, Phil Yates creates both a playable mid-WWII scenario using ‘recon by combat’ and imparts the callous and horrifying nature of this Red Army tactic. The Assyrian Army The Chariot Wars era came to a close with the Assyrians use of cavalry, but before the advent of the warrior horseman the Neo-Assyrians under Tiglath-Pileser III fielded some of the mightiest chariots in the
If you are seeing this message after signing in, PLEASE PRESS THE BROWSER REFRESH BUTTON