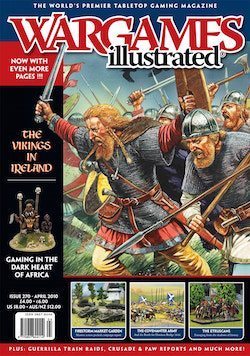 The Vikings in Ireland Your introductory guide to the Viking invasions of Ireland; the tribes they battled with for supremacy, and the history of their struggle for control of the Emerald Isle. The Covenanters Pike and Shot It could be argued that the first English Civil War was decided by this force of Scots, whose fighting prowess tipped the balance of the conflict in favour of Parliament. In this article we present an introduction to the Covenanters and a scenario for gaming a clash with the forces of Prince Rupert. Heathens at the Gate Dark Age A look at Viking and Irish armies and the warfare they employed in Dark Age Ireland, followed by two scenarios for running tabletop battles using marauding Vikings against the resilient Irish.  Firestorm Market Garden WW2, WWII, World War Two When the team at Battlefront finished their new Firestorm campaign for Operation Market Garden, they tried it out on the rest of the staff. The result was five weeks of gaming fun. Phil served as the German general and kept notes and wrote up the highlights of the campaign and its battles. The Plain of the Bull   The Battle of Clontarf is one of the touchstones of Irish history, a defining event of the kind that – like Hastings in 1066 – has accrued so much legendary material that the actual facts have been overwhelmed by a simpler mythic version of the event. In this article Howard Whitehouse explores the history and presents a scenario for gaming the battle. 1588 and all that Pike and Shot In the second of our three articles exploring the gaming opportunities offered by Elizabethan England, Tim Eagling presents a scenario for some doublet and hose swashbuckling action. How to make An Early Christian Church   The Irish monastic buildings from our theme period had a unique look and will add a great deal of character to your tabletop. Model-making supremo Paul Davies gives you a step-by-step guide to knocking up a early Christan church. Guerrilla train raids   WW2, WWII, World War Two Following on from last month’s Kaukopartiojoukot 1942 – 1944 article – we present more information on the Finnish long-range reconnaissance troops, along with an action packed ‘Train Attack’ scenario. Viking Painting Guide Dark Age To conclude our Viking coverage for this month, this article provides you with several ideas and guides to painting different aspects of your Viking and Irish figures. The Etruscans The history of the Etruscans is shrouded in mystery, but by digging deep Dave Pauwels presents
If you are seeing this message after signing in, PLEASE PRESS THE BROWSER REFRESH BUTTON