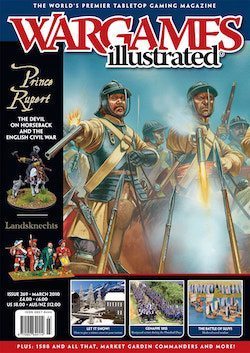 Prince Rupert : The Devil on Horseback Pike and Shot We kick off this month’s theme content with a look at the character who threads the whole thing together; Prince Rupert of the Palatinate. We follow his introduction with a painting guide giving directions on what paint to put where on your Rupert figure.   W.A.B. Campaign weekend Ancient All the action from the latest WI sponsored Warhammer Ancient Battles campaign weekend at Warhammer World.   The Skirmish at Potwick Bridge Pike and Shot The first action of the English Civil War sees our hero (or villain!) engaged in some 28mm skirmish action in an attempt to drive the Parliamentarians back the way they came; over the bridge with their tails between their legs.   Point of the Spear WW2, WWII, World War Two How to get the Airborne commanders of Operation Market Garden into action on the tabletop in your Flames of War games.   The Battle of Edgehill – October 1642 Pike and Shot Our ECW attention turns to the first large scale battle of the war, notorious for Prince Rupert’s devastating cavalry charge.   1588 and all that Pike and Shot Fancy gaming something a bit different? In this series of three articles Tim Eagling explores the gaming opportunities offered by Elizabethan England. Part one provides you with all the background to the period.   Great Warriors: The Landsknechts We begin this new irregular series of introductory level articles with a look at some of the best dressed warriors in history – the Landsknechts.   The Battle of Birmingham, April 1643 Pike and Shot Prince Rupert’s forces descend on the Parliamentarian stronghold of Birmingham. We examine the truth and myths behind the attack and present a tactical wargame using the 1644 ruleset.   A Rearguard action near Genappe 1815 Barry Hilton stakes a claim for gaming the lesser known actions of the Hundred Days campaign, and presents a scenario for one; The Battle of Genappe.   The Battle of Marston Moore, July 1644 Pike and Shot Princes Rupert’s luck ran out at the Battle of Marston Moor; the beginning of the end for his command in the Royalist army. You will find all the background and a scenario for re-fighting this seminal ECW battle.   Kaukopartiojoukot 1942 – 1944   A Flames of War briefing for Finland’s long-range reconnaissance troops.   Sluys, 1340 Leading authority on naval wargaming; David Manley examines this medieval naval battle off the coast of France and presents some quick play rules for re-fighing the action
If you are seeing this message after signing in, PLEASE PRESS THE BROWSER REFRESH BUTTON