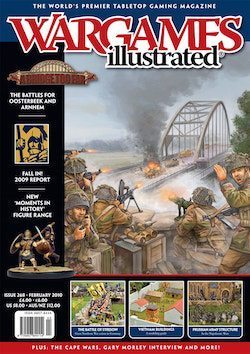 Operation Market Garden WW2, WWII, World War Two Setting the scene for this month’s theme content; Market Garden, the largest airborne operation in history. “The land is dead” It’s not a conflict on the wellbeaten wargames trail but Ian Knight explains why and how South Africa’s Cape Wars should be on your wargaming radar. Frost’s perimeter A mini-campaign based on the new Flames of War – A Bridge Too Far book following the story of Lieutenant Colonel Frost’s 2nd Parachute Battalion in Arnhem. The Battle of Stresow The Border Reivers Wargames Club looked to the icy Baltic Sea and the Great Northern War when they decided to put together a great table on the 2009 show circuit. Rob Anderson gives us the lowdown on the Battle of Stresow and the Reivers’ approach to the project. A bridge too far Building the Arnhem battlefield. To accompany their new A Bridge Too Far book Battlefront Miniatures needed to construct a suitably impressive table to showcase the visual potential of the battle. In this article we discover how they went about it. Blam 2009 Linking cyber-space with the real world, the Lead Adventure Forum’s event held in Twickenham, UK, was a wargames show with an interesting twist…. “Vorwarts, meine kinder” A comprehensive guide to building a late Napoleonic Prussian Wargames Army. How to make south east Asian buildings Inspired by the recent new range of Vietnam figures from Wargames Illustrated, our regular scratch-builder Paul Davies explores some modeling possibilities. Fall in! Show report Show It’s one of the Historical Miniatures Gaming Society’s big shows of the year, and with camera and notebook in hand our US editor headed off to bring you the highlights of the 2009 event held in Gettysburg. Insider interview: Gary Morley: Not only is he the sculptor behind the new ‘Moments in History’ figure range from WI, Gary has had an elustrious sculpting career in the historical and fantasy hobby. We thrust a microphone in front of him and asked him to tell us about some of the highs and lows of sculpting toy soldiers. Moments in history The lowdown on the new figures in our exciting new range of vignettes. Club focus We pay a visit to a club night hosted by the Harford Area Weekley Kriegspielers and chat with club member John ‘Buck’ Surdu about all things ‘H.A.W.K’. Reviews A look at some new wargame related releases
If you are seeing this message after signing in, PLEASE PRESS THE BROWSER REFRESH BUTTON