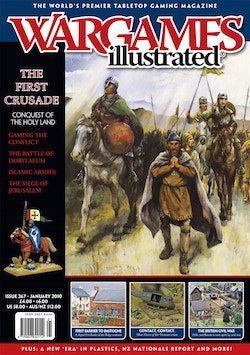 The First Crusade 1096 – 99 Conquest of the Holy Land Medieval Setting the scene for this month’s theme content, including a timeline of events and plenty of wargaming ideas. Contact! Contact! Yellow one down! Following on from last month’s theme – we take another trip to Vietnam and present a scenario pitting a platoon of American Air Cavalry against a battalion of NV regulars. The Battle of Dorylaeum Medieval One of the deciding battles of the First Crusade. The Battle of Dorylaeum was a desperate fight for survival between the crusading forces of Bohemond and Robert of Normandy and the assaulting armies of Kilij Arslan. The New Zealand Grand Tournament All the action from this year’s Flames of War Late War GT held in Auckland. Islamic Armies of the First Crusade A close look at the armies of the Seljuk Turks and Fatimid Caliphate – the forces which faced the crusading hordes.  The Italians can rob my Country – When I am dead! – part 2 The second part of our article covering wargaming the Italo-Ethiopian War of 1935-36. This month we’ve got more background, a scenario and a review of the figures available. How to build Siege Towers Medieval Sieges were a significant part of the First Crusade and if you are going to wargame a siege you are going to need a siege tower. Here’s your step-by-step guide to building one…. The heat of battle Wargaming at the National World War II museum in New Orleans. The Power and the Glory: The Siege of Jerusalem Medieval The culmination of the Crusaders’ efforts in the Holy Land was the capture of the city of Jerusalem. This article presents a wealth of background for the ‘main event’ and a scenario for replaying some of the action. Guard’s Battlegroups The history and tactics of the late-war Guards Armoured Division in Flames of War. Store Spotlight Wild West This month’s store under the spotlight is Gajo Games out in the Wild West of Utah, U.S.A. Rules Roundup Medieval Some suggestions for First Crusade game play.  First Barrier to Bastogne WW2, WWII, World War Two A Rapid Fire scenario simulating Kampfgruppe von Bohm’s initial assault against the 9th Armoured Division during the Battle of the Bulge in WWII. A new era for Plastics Perry Miniatures delve into a new period with their latest plastics box set. Michael Perry reveals all…. Have Army, will Travel The tale of two gamers who travelled to the other side of the world in pursuit of their hobby. The Severn
If you are seeing this message after signing in, PLEASE PRESS THE BROWSER REFRESH BUTTON