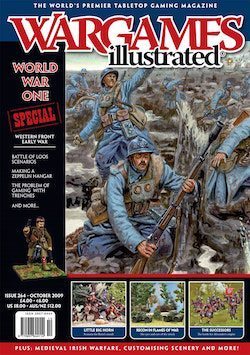 The Western Front 1914 – 1915 WW1, WWI, World War One Setting the scene for our WWI – early war on the Western Front theme, we present an overview of the action from the period. The Successors What were the wars of Alexandrian Succession all about, and what ammunition do they offer the gamer?  Airborne Landing Rules How to plan and conduct airborne landing assaults in Flames of War. Attack Everything! Lieutenant Lanoe Hawker’s daring raid on the zeppelin shed at Gontrode. A Wings of War scenario. Late Medieval Irish Armies With the help of some great photos we explore the make up of an Irish force of the late medieval/renaissance period. Zeppelin Hangar WW1, WWI, World War One How to build a WWI zepplin hangar, a great addition to any aerial combat game. Eyes and Ears WW2, WWII, World War Two Reconnaissance in Flames of War. Covering all the major WWII forces, how they employed their tactics and how to emulate this on the tabletop. Reno’s Assault at Little Big Horn Probably the most iconic battle of the ‘Old West’, our scenario focuses on Major Marcus A. Reno’s failed assault on an Indian village in the Little Big Horn valley. The Big Push WW1, WWI, World War One The Battle of Loos 1915. All the background and two scenarios for gaming the British assault on the German trenches. Spotlight New plastics manufacturer – Mantic. St. Oedenrode WW2, WWII, World War Two The 101st Airborne regiment’s attempt to take the St. Oedenrode bridge, Holland 1944. A scenario with a Flames of War focus, but adaptable for any WWII system. Paint a WWI Highland officer WW1, WWI, World War One, Painting A color guide for splashing paint on a WWI Scottish Highland officer. Historicon ’09 Show Report Pt 2  Show This month we asked Michael Koznarsky, MD to take a look at some of the people that underpin the HMGS convention’s War College and Miniature Hobby University. The Problem of Trenches A few different options for tackling the tricky problem of gaming with trenches. How to customise your scenery Some great ideas for ‘touching-up’ your pre painted ‘out of the box’ scenery. Rules Roundup WW1, WWI, World War One Some suggestions for your WWI game play. Club focus This month’s focus is on the Games Korps. from Columbus, Ohio. Reviews Monthly roundup of what’s hot, and whats not.
If you are seeing this message after signing in, PLEASE PRESS THE BROWSER REFRESH BUTTON