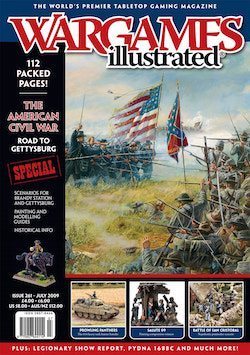 The Road to Gettysburg introduction ACW, American Civil War We set the scene for the showdown at Gettysburg with the background (and splendid artwork!) to General Lee’s invasion of the north. The Battle of San Cristobal Napoleonic British and French forces do battle around the church of Saint Christopher near Cadiz. Time is of the essence in this Napoleonic Peninsular War scenario. The Battle of Brandy Station, 1863 ACW, American Civil War As Lee’s army pushes north the Union and Rebel cavalry clash near Fredericksburg in the “first step towards Gettysburg.” Weekend wargame at the national WWII museum WW2, WWII, World War Two, Event We chat with the education programs coordinator at the National WWII museum in New Orleans. The Union Cavalry ACW, American Civil War The Battle at Brandy Station (page 22) has been quoted as the “coming of age” of the Union cavalry, we discuss this idea and provide a painting guide for Union cavalry figures. Prowling Panthers WW2, WWII, World War Two Rowling The 654th Heavy Tank-hunter Battalion Normandy, July 1944. Loads of great background detail and a complete Flames of War army list. Salute Painting Competition Painting The winners from this year’s Salute show. Major General J.E.B. Stuart ACW, American Civil War One of the Confederacy’s most colourful characters. A biography and painting guide. The Battle of Pydna 168 BC Ancient The final battle of the Third Macedonian War. A mighty clash of phalanxes in this Warmaster Ancient scenario. Gettysburg: Day One  ACW, American Civil War After a brief introduction we get down to the action on day one at Gettysburg. The battle could be won or lost and the fate of the nation decided in this large scale 6 – 15mm scenario. How to make a North American mansion ACW, American Civil War In this month’s ‘how to’ we dovetail nicely (but not necessarily!) with our ACW content by showing you how to construct a miniature mansion. Remain at all Hazards ACW, American Civil War A scenario for refighting the heroic ‘retreat by recoil’ action of The Ninth Massachusetts Battery at Gettysburg. Legionary Report Show We took a camera and notebook to a buzzing little wargames show in the south west of England. The Guns at Vicksburg ACW, American Civil War To conclude our Road to Gettysburg content we divert our attention by a thousand or so miles to look at Vicksburg and the big guns of the Civil War. Reviews Our monthly roundup of what’s hot, and what’s not.
If you are seeing this message after signing in, PLEASE PRESS THE BROWSER REFRESH BUTTON