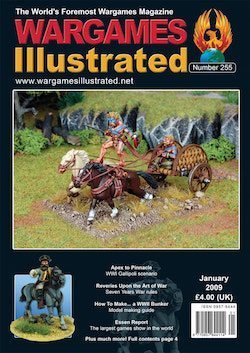 Apex to Pinnacle WW1, WWI, World War One Lord Sherwell and Chums The Auckland Battalion’s assault on Chunuk Bair during the WWI Gallipoli campaign. Including army lists for The Great War.   Reveries Upon the Art of War Part three Gaming Ian Wilson The third part in our series of articles which will form a complete rule set for Seven Years War gaming.   How to… Make a WWII Bunker WW2, WWII, World War Two Paul Davies This month Paul shows us how to make a basic coastal bunker.   Yanks Ashore Back of Beyond Bob Black The story of the 1917 ‘punitive expedition’ launched against the Mexican revolutionary Pancho Villa by the US Army, and the possibilities for wargaming the adventure.   Grand Masters Painting Jim Bowen This month’s master is painter and sculptor Jim Bowen.   Rebellion in the Transvaal Colonial Martin Porter Campaign opportunities for the 1880 – 81 First Boer War.   Constantinople 1453 Medieval John Bianchi The fascinating history and a challenging siege game based on the Ottoman siege of Constantinople.   Boardgames – Essen Gaming Richard Denning Our boardgamer reports back from the largest game show in the world.   Britcon Report Show Philip Bolton A novice’s viewpoint on the annual British Historical Games Society showpiece event in Manchester.   Evil Internet? General Ephraim Gadsby The pros and cons of wargames related internet chitter-chatter.   Philosophy General Kevan Clarke The stream of consciousness and the art of wargaming.
If you are seeing this message after signing in, PLEASE PRESS THE BROWSER REFRESH BUTTON