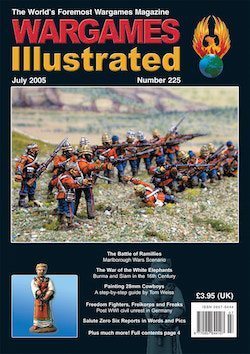 The Battle of Ramillies, 300 Years On

At the beginning of the year 1706 the Duke of Marlborough conceived an audacious plan to march an army south to assist the Austrians, under Prince Eugene, not to Bavaria as he had done in 1704, but over the Alps to Italy…

One of the ‘Too Fat Lardies’ demo game team gives us his retrospective view on this year’s Salute.

Photos of the winner of this year’s best demo game prize.

The Crawley Wargames Club give us the background details on their 25mm Dark Age display game.

Photos of some of the Salute painting competition winners

Salute Zero Six: On behalf of the Warlords…

We round off our Salute Zero Six coverage with an open letter form one of the event organisers.

The War of the White Elephants

After the events of the year 1548 which involved the Burmese invasion of Siam and the death of Somdet Phra Suriyothai, the next major conflict between the two nations occurred in the year 1563, over the possession of “white” elephants.

We explore the climate of turmoil and opportunities for wargaming in post WWI German.

The Battle of White Moors – Report

This year’s two free figures for subscribers are our designers’ interpretations of the legendary figure – Lady Godiva; but who was she? Vince investigates…

Adding stowage and finishing your vehicles. The final part of this step-by-step guide.