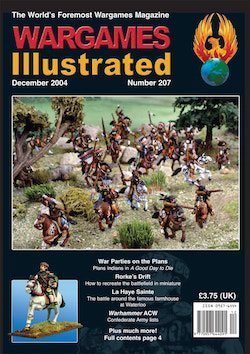 North American Plains Indians and how to organise war parties in A Good Day to Die.

The results of a second WWII scenario played out using two different sets of rules.

John takes us on a tour of his massive tabletop reconstruction of Rorke’s Drift.

More rules for hunting big game on the African savanna.

Warhammer army lists for ‘The Rebs’ and generic troops in the American Civil War.

A festive account of a little known truce between the British and Germans, Christmas Day 1914, East Africa.

Vladimir Assmatski Bolsheviks and local Chinese warlord, Phat Lip fight it out in the Back of Beyond.

SELWG – In words and photos
Show

Exploring “the best” wargames show of the year