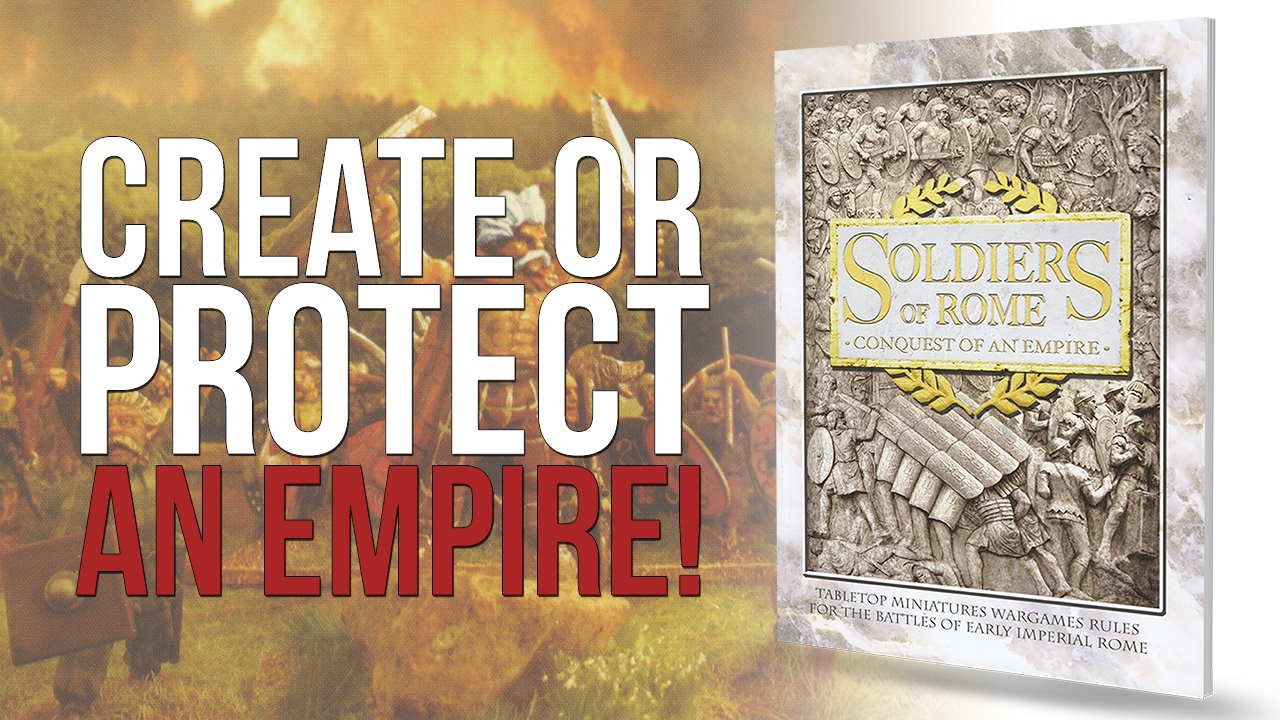 The recently released Soldiers of Rome provides rules for games set during the wars of the early Imperial period. This is an A5, 120-page, glossy softback book, which requires at least one set of the special cards to make use of the rules presented between its covers. These rules are designed for a variety of figure sizes, from 6 to 28mm.

A brief introduction to the concepts behind the rules is followed by more specific points, such as the use of ‘Paces’, a flexible measuring system dependent upon the size of the figures used and the player’s choice, the use of six-sided dice units and basing conventions.  There is also the first of the ‘potted histories’ included in the book, with this first one focussed upon the Gallic Wars of Caesar. These are useful guides to the history of this vital period in Roman history.

The main driver behind these rules is the use of Action Cards. The four basic types of card are as described and shown here. These four types of cards, the ‘four M’s’, which are Movement, Missile, Melee and Morale. These are drawn as a part of your Battle Plan as part of the preparation for the game. Cards may also be used for a number of reasons as noted upon them (Special Events, Hold, Pass and Discard and Trade In).

The sequence of play revolves around the idea of establishing the Initiative and then playing a number of Action Cards until all the players have run out of cards. Players use the Movement cards for suitable Manoeuvres, the standard Change Facing, Wheel, etc. These all reflect the established possibilities of the troop type, offering a level of ‘tabletop realism’. This approach continues through the various cards, with options dependent upon troop type and some important decision making for the player.

The role of Command Stands is briefly touched upon, and the rules for Missile and Melee are covered, covering all possible options and with some detailed examples. Army Morale is covered in more easy to follow sections, simple to read and access. The rules for creating your initial Battle Plan, using your first few Action cards, are covered, with diagrams and textual explanation of the options available.

One of the options for the action cards is the use of those noted as Special Events. These are fully outlined in the rulebook, and have applications to all or certain armies. These add that extra ‘something’ to the character of an army, as do the various Special Rules for the somewhat generic ‘Barbarians’. The basic scenarios are outlined, based upon three types, Field Battle, Raid or Siege. The Army Lists are next, for the Romans with their unique Strategems and Barbarian armies, with special list variants for those looking to field armies from a certain background.

The latter part of the rulebook contains some handy rules for Sieges, plus suitable roster sheets, summarised unit profiles and a quick reference sheet.

The use of Action Cards and the overall breadth of these rules means that no two games will ever be alike, even if using the same scenario. There are hours of playability in this rules system, with plenty of variance to keep Ancient Era gamers coming back for more.