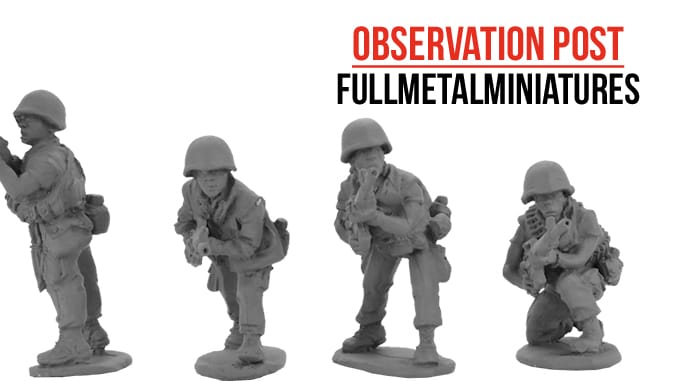 Fullmetalminiatures is a new UK based company with an expanding range of miniatures for the Vietnam War.

Received for review are two packs from the range. The four figure pack has standard US Marines armed with M16s and an M79 “blooper” grenade launcher. The second pack contains two figures, one with an M60 and the other figure comes with an M16. This pack also contains two ammunition belts, one for the M60 and one for the second figure. The figures come with separate right arms, holding the main weapon being used, apart from the M79 grenadier who is a complete figure.

The whole range is designed to fit the 1968 Tet Offensive and in particular the street fighting that involved the US Marines around the city of Hue, hence the flak jackets and extra equipment.

These are well sculpted and cast miniatures, just on the right side of ‘chunky’ and seemingly accurately posed and equipped based upon contemporary photographs. It’s always good to see a new company starting up, especially one where efforts are being made to offer high quality at a sensible price.

Future releases will see more US Marines over the coming months, as well as ARVN, Viet Cong (some packs are already on the website), NVA regulars and Australians plus US infantry. Armour in the form of an M41 Walker Bulldog and an M42 Duster are ready to cast.

Plus, apparently on the work bench at the moment are the M48 Patton MBT, US PBR boat and 3 x different sampans.