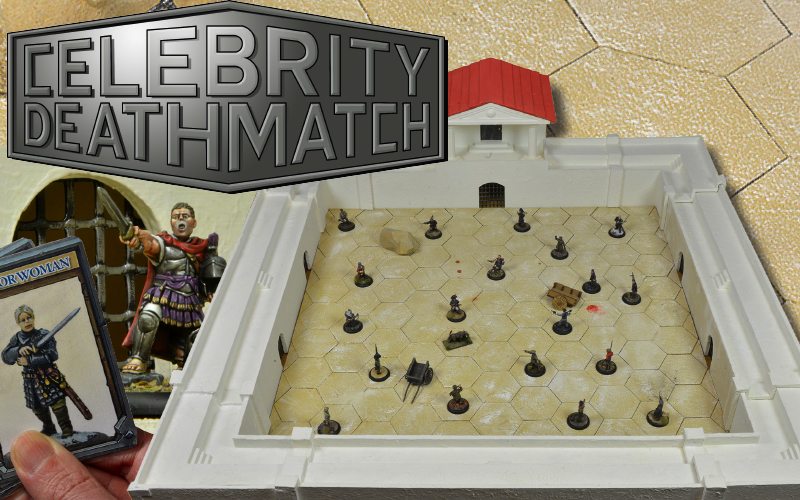 Is it possible to invent a wargame that involves 17 different personalities from 2,000 years of human history, all in action on the tabletop at the same time, that takes around 15 minutes to play? No, not really. That’s why we invented ‘(Semi-Historical) Celebrity Deathmatch’.

To say our Salute 2017 participation game is a ‘wargame’ would be pushing it a bit, but we do hope it will be a fun 15 minutes for anyone passing by the Wargames Illustrated stand who fancies throwing some dice, having a laugh and potentially winning a prize.

HOW TO PLAY
But how do you play this silly, throw away game, which shamelessly plugs your range of 28mm Giants in Miniature figures, we hear you think?

Begin by thinking Roman gladiatorial combat, on a hex board preferably, but on any tabletop surface if not. You will need one six-sided dice (D6) per player.

Aim of the Game
To collect as many points as possible. Points are collected by A) Killing other models. B) collecting piles of gold.

Lives
Each character has two lives. They are removed after losing their lives.

Move
Each character moves a maximum of 2 hexes during their turn and can face in any direction whilst doing so.

A model cannot enter any hex which contains another model or an obstruction. This also applies to knock backs.

Attack
When a model is in a space next to another, the player throws a D6 to try and hit –