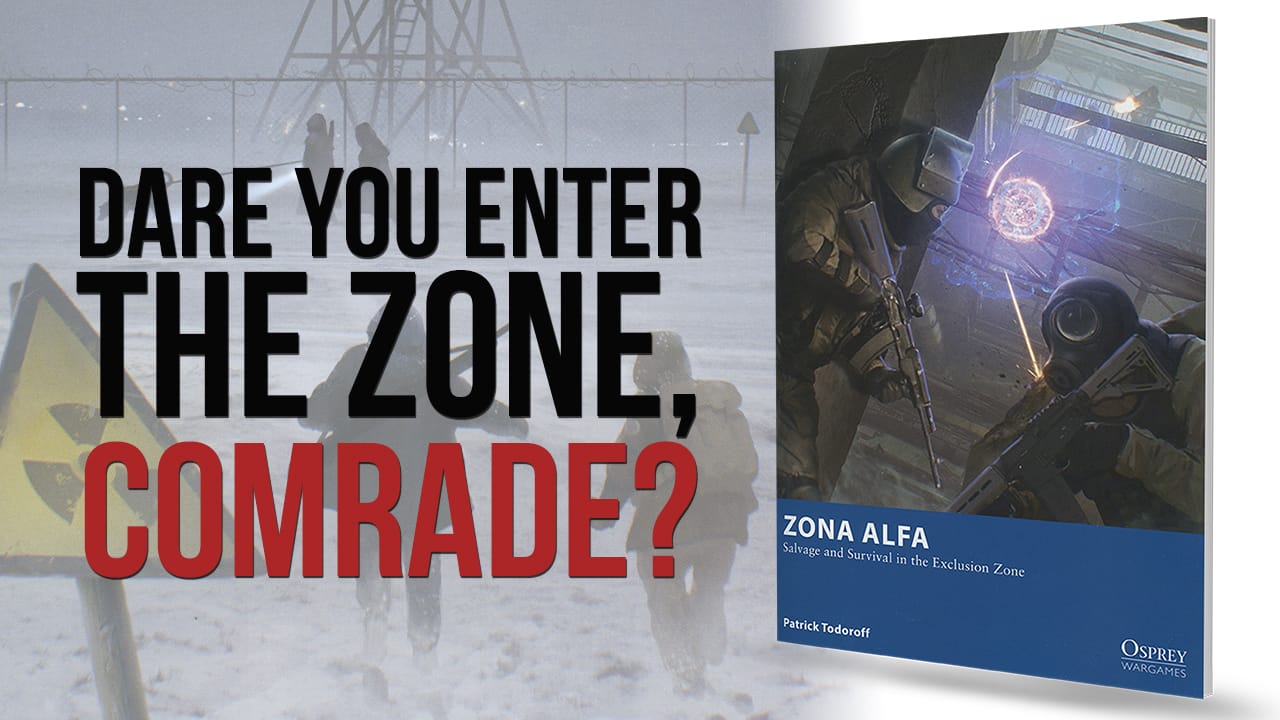 Zona Alfa is a skirmish level game set within a distinctly Russian background, with deliberate overtones of the S.T.A.L.K.E.R. and METRO 2033 backgrounds, a type of pseudo pre- or post-Soviet aesthetic. Players venture into an extreme version of a post-Chernobyl Disaster style environment, an area known as The Zone, where temporal anomalies nestle alongside mutants and other dangerous creatures. This is a 64-page, full colour ‘blue book’ series softback book, with photographs of miniatures and specially commissioned artwork.

The book begins with an introduction to the author’s time as a gamer, his intentions and the key concepts behind the game. The ideas are explained in simple terms, whether the classic What You See Is What You Get, the use of D10 and D6 dice, targets, setting up a game and the two main types of stats used, Model and Weapon stats. Core mechanics and classes of characters are outlined, which leads to how many actions may be undertaken by each ‘unit’, a catch-all term used to define an individual character figure or group of ‘Zone Hostiles’. A list of basic actions and how to undertake more Complex Tasks and Skill Checks is explored, as are movement, line of sight, the uses of terrain and cover.

Of course, any exploration wargame set in a dangerous place needs combat rules, and these are covered in a simple, well-explained fashion, complete with copious examples. Ranged and melee combat are dealt with quite rapidly, as are the results of combat in the form of Wounds, Pins, the need to Rally, using Med-Kits, etc.

Having dealt with the key concepts and rules, including some nicely done snippets of the background to The Zone, it’s time to put together a ‘crew’. First of all, the potential choices of weaponry are covered. These are generic rather than specific choices, so it could easily be possible to focus in on Russian-themed weapons or those from other backgrounds. The rules for weapons, armour and other aspects are covered. Having provided weapon stats, its time to equip your characters, including adding the Skills that help to make members of your crew unique. Equipment charts and costs are given in chart form, using the concept of ‘Zone Script’ as your pints to outfit your squad. Character and Squad creation is covered, using a set number of points called Khrabrost’, a Russian term which translates roughly as bravery or courage. Players get a starting level of 12 Khrabrost’ to spend, with the three levels of character costing the values noted and noted with starting equipment, armour, etc. next comes a choice of Factions, giving your squad a suitable amount of motivation or an overall character of it own.

The idea of missions, and mission objectives is explored, as is the post-mission experience. Types of mission are offered, and the game focusses on a linked, narrative style approach. The post-mission phase includes advancements, selling and buying new items, gaining extra or replacement squad members, pretty much all the standards of campaign play are covered, using different aspects of the fictional background to maintain the overall setting and atmosphere. There is also a solo-play option, using an ‘A.I.’-style approach to make use of the NPCs or Zone Hostiles that may be encountered.

The final pages of the book offer a number of examples of missions, including a series of linked introductory adventures that allow new players to try the rules out.

This is a simple, well-explained set of rules, placed within a background that is suitably different. A low figure count, an interesting background and an easy to use squad creation and campaign system makes this the exact type of rule system the Osprey ‘blue book’ series was designed for.