Your favourite wargaming period is… 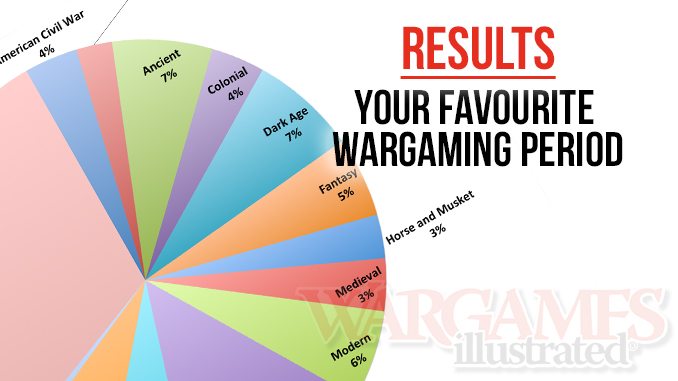 Having now hit over 10,000 Facebook ‘Likes’, we thought it was time to celebrate! So, our usual ‘hitting another 1,00 likes’ giveaway was split into five separate prizes and, as always, we decided to run a survey. Our topic this time was a recurring theme, that perennial question asked wherever gamers get together: What is your favourite wargaming period?

As always, this is only a ‘snapshot’ survey based upon input from those who contributed from the world of social media rather than being taken directly from our subscriber database. However, it is our first one of 2017 and provides some interesting data. World War Two gaming dominates once again, far ahead of all the other topics chosen. Scale and size of models and miniatures is an unknown variable here but we suspect that rules such as Bolt Action, Battlegroup and Flames of War are important factors. The Napoleonic era is next amongst those who responded, a healthy ‘double figures’ percentage. Ancients, Dark Age, Pike and Shot and Sci-Fi all scored the same percentile, suggesting that rules and miniature releases like Pikeman’s Lament, Swordpoint, Rogue Stars, etc. boosted interest in 2016 / early 2017, were partly focused on these areas or that some gamers remain loyal to the established rules that they already have. The Modern era also features, perhaps due to companies like Empress Miniatures, Spectre Miniatures and many more putting out such high quality figures in a whole number of scales. Of course, the continued support for the Team Yankee range may also be having an impact.

A trend towards the realms of Fantasy may be supported by the growth of interest in the topic engendered by the Dragon Rampant rules but the term ‘Fantasy’ is a broad church which covers all sorts of sub-genres. Colonial also covers a fair swathe of options but scored a quite low percentage. Perhaps new supplements for games like Congo and re-vamped rules systems like Death In The Dark Continent during 2017 may help here. Horse and Musket, ACW and AWI were pretty low and Medieval appears to have slipped somewhat, whereas World War One continues to languish at the bottom end. Of course, this was by necessity a ‘broad strokes’ survey with results taken from those who responded – the hobby remains remarkably diverse and long may it continue to do so! In our next survey, we’ll perhaps aim for a more definitive look at one or two periods, taking on board issues of size / scale, rulesets and more.