Your favorite wargames rules are… 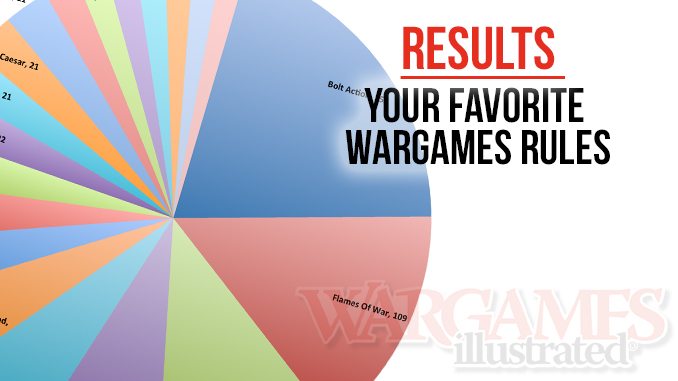 Once again, having reached a major milestone, in this case over 9,000 Likes on Facebook, we put together a giveaway offer and another of our surveys. We decided to focus on rules systems, offering a select list and the option to add more. Now that the results are collated, we’ve turned them into our classic pie chart. However, as we had 1,040 votes, double what we had last time we asked this question, we decided to include the number of votes per ruleset, so you can see how things have worked out.

First of all, there has been a marked increase in the number of votes for Bolt Action, with Flames of War coming second. That would appear to suggest that World War Two gaming is still one of the most popular trends. Interestingly, the entirely free, fan-produced Fantasy Battles: The 9th Age has made a good showing, perhaps reflecting the changing demographic of those who interact with the magazine in one way or another. Black Powder also scored quite highly, so big historical battles with plenty of figures are still popular. Frostgrave scored next highest, with SAGA and Chain of Command not far behind, so fantasy continues to entertain, the Dark Ages are still popular and World War Two features once more. Warhammer 40K garnered a fair few respondents, as did Kings of War, which demonstrates that these two systems are part of many gamers’ backgrounds and current gaming experiences.

Interestingly, the world of larger and smaller scale skirmish games rank roughly alongside larger simulations of historical battles, with rules such as Lion Rampant and In Her Majesty’s Name scoring around the same level as Hail Caesar and Sharp Practice. The inclusion of Battletech on the list shows that the community for this venerable set of rules is still active, as are the DBA and Warhammer Ancient Battles players. Malifaux and Infinity still feature, but the relatively new Team Yankee appears to have made an impact and the Battlegroup and Impetus rules feature for the first time. Those rules systems scoring less than ten votes also represent the whole breadth of gaming, with at least two of the systems mentioned, Blood Eagle and Congo, still being relatively new. It remains to be seen what their impact may be in the future.

So, there we have it, our latest survey, which suggests that the gamers who responded have a range of views and are not entirely bound by any one ruleset, but that World War Two in at least two different figure and model scales remains one of the most popular periods to game. We’ll have to see how the votes pan out for the next survey of this type and, who knows, perhaps another new ruleset is poised to take the world by storm in the meantime!