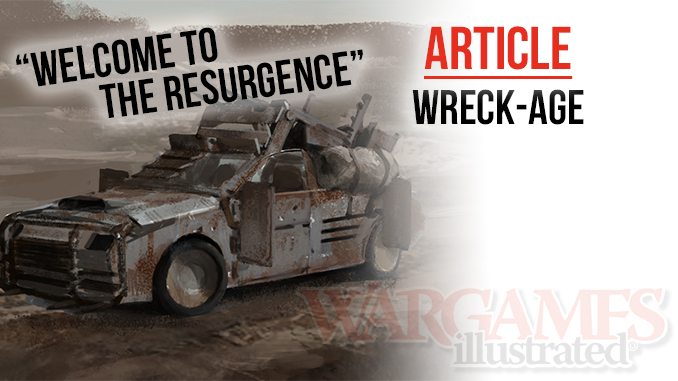 “Welcome to the Resurgence.

Two centuries ago, the Earth verged on total collapse. Clouds of pollution smothered every major city, rising oceans threatened to burst coastal defenses, crops were failing, and people were starving. Transportation suffered greatly during these times, as old world fuel sources became more and more scarce. Many conflicts were fought over dwindling resources, while the vehicles used in these conflicts drank up the last precious drops of those old world fuel sources. Left with no alternative, world leaders collaborated on a last-ditch effort to save humankind: the Exodus. It was a grandiose plan involving several waves of evacuations, with the end goal of colonizing distant planets. The Exodus promised survival for everyone. It was an escape from a decaying planet.

Only a choice few ever made it to the stars. For those left behind, generations have passed; a new society has emerged from the ashes of the collapse that followed. Recovery is slow and painful. Few grand cities remain, and even fewer great leaders. There is no centralized structure. The powerful fight over the scraps of the old world, while the weak struggle just to make it through another day.

Now, years after that initial collapse, the most common ways to get across the Great Midwestern Wilds is via long-haul caravan, via boar or pedal cart, or with a ramshackle biodiesel or hydrogen powered vehicle. Vehicles have been a part of the messengers’, raiders’, and caravanners’ way of life on the Merikan continent for centuries, and they borrow heavily from old world designs. Most of these vehicles are built from scratch using bartered, salvaged, or manufactured goods. However, they all share one thing in common: a small semblance of protection from the elements and the odds, and a means to traverse long distances with relative speed and efficiency.”

In Wreck-Age, your miniatures battle it out on the tabletop in a unique narrative hybrid of efficient skirmish battle and roleplaying drama. By introducing vehicles, you’ll be able to expand the size and scope of your games. From the basic 3’ x 3’ gaming table through to huge layouts that stretch for dozens of meters, you can create death race scenarios, caravan chases, and run the gauntlet of ‘toll booths’ set up by highway robbers. The only limit is the amount of space you have, and your imagination. No matter how you choose to integrate vehicles into your Wreck-Age experience, you’ll be able to move your models around the board much more quickly than you would on foot, using simple rules mechanics that allow for depth of play, while maintaining ease of play, and ensuring record keeping is kept to a minimum. You can take control of a crew of your choosing, selecting from the nomadic Drifters, the pragmatic Stakers, the tech zealots known as the Reclaimers, or the vampyric Stitchers; you may even choose to venture off into the Wilds in your vehicles, without the support of an organized faction.

We agonized long and hard while developing the vehicle rules. Many challenges needed to be addressed. Balance was our first priority throughout this process. Namely, how to keep the vehicles from being over (or under) powered, and how to keep the balance between the average walking character, and one in a fast moving vehicle. The Resource Unit (RU) points system allowed for considerable tweeking and adjustment, to try to find the right balance for each vehicle type. Vehicles also present unique opportunities and challenges in the Wreck-Age game. The game boards are typically fairly small, so finding a way to simulate full speed movement was crucial to the success of the introduction of vehicles. Many vehicles have armor upgrades, allowing them to further protect the characters inside, so lots of playtesting has been done to ensure that those protections aren’t too difficult or too easy to penetrate. Small arms may find difficulty making it through the heavy armor of a large truck, but should be able to penetrate light armor on a small buggy with relative ease (and maybe a little luck of the dice).

In regards to game play; activation occurs for each character in the vehicle, just as it would if they were on foot, in an alternating activation sequence where players choose who in their crew activates and in what order. So depending on what order you decide to activate your characters, you might have your driver will be able to steer and control the path of vehicle, and then see an opposing gunner snap off a few shots, before one of your passengers decides to hurl a Molotov cocktail. The order you and your opponent choose can change each and every turn, so the possibilities are almost endless.

The benefit to including a vehicle in a warband is fairly obvious – the speed! However, being able to move at high speeds in vehicles in not without its price. Vehicles are often expensive to maintain, costing your crew RUs to keep running. This represents fuel, as well as maintenance and upkeep. You gain these RUs through achieving objectives, and they can be used to buy upgrades, advance your community, and train new members for your crew.

Vehicles are a logical and necessary step to growing the Wreck-Age universe. Just like in the real world, character in Wreck-Age need to move around faster than their legs can carry them, and vehicles also afford a wonderful opportunity for modeling, painting, and converting. Entire games or campaigns can be played using these new vehicle models and the Wreck-Age vehicle rules. With all of these elements in mind, we look forward to having vehicles hit the Wreck-Age table and take part in many games to come.