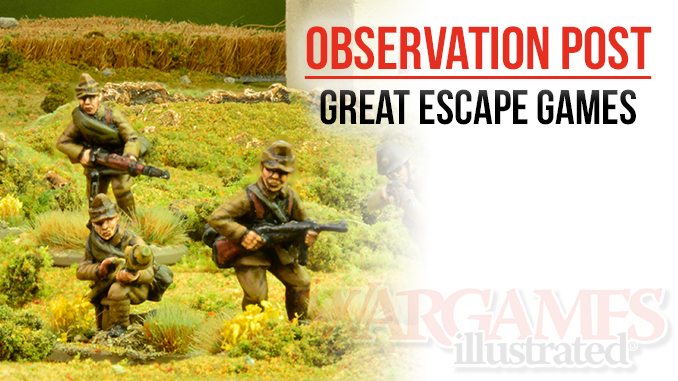 Great Escape Games have added to their range of World War Two miniatures with an upcoming new set of Romanian infantry. The Kingdom of Romania fought as part of the Axis forces up until 1944, sending troops to fight on the eastern Front and elsewhere.

The figures wear the standard uniform, the Dutch style helmets and some have the traditional capela, a type of headgear which bore some resemblance to the German feldmütze or field cap. In addition to their standard equipment, some are wearing ‘blanket rolls’ across their bodies.

The weapons depicted on the miniatures include the vz.24 carbine, a copy of the German Kar.98, the Orita SMG and the ZB vz. 26 or 30 LMG. A few of the figures carry the German MP40 SMG and wield a Panzerfaust, plus there is a medic figure.

All the miniatures are well sculpted and many of them are in good quality ‘action’ poses. There are Command, Support and Infantry Squad packs on the way, with more choices planned. An under represented army in 28mm, these miniatures are no doubt welcome to those looking to field one of the minor Axis powers.