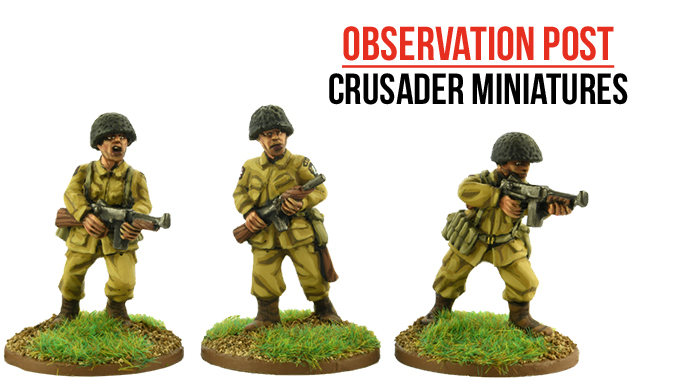 US airborne are the latest addition to Crusader Miniatures extensive World War II range, which already contains US infantry and anti-tank guns, along with British, French, Poles, Russians and Germans!

The first two packs contain riflemen, who are all in nice action poses and are very detailed sculpts. Each pack contains four figures, with the only difference being the men in the first pack have backpacks whilst those in the second do not. The next pack contains four BAR men, two with backpacks and two without. Again, the men are in dynamic poses, with two running and two firing, which are ideal for the kinds of skirmish game you will want these miniatures for. The squads are rounded out with a pack of NCO’s, two carrying carbine and two with SMG, with two in running poses and two firing.

US Airborne with SMG & Carbines

US Airborne with SMG & Carbines

US Airborne with BARs

US Airborne with BARs

Next up are two packs containing heavy support weapons, namely a .30 calibre machine gun and a 60mm mortar. Each of these contains three crew and the weapon itself and are all depicted in firing mode. I particularly liked the mortar team, with all three crew depicted kneeling next to the weapon, which would fit neatly on a round 40mm base. Finally, there is a pack of four command figures, two of whom are depicted in dynamic fighting poses, with one at a more sedate walking pace. The final standing figure is holding a map in one hand and a compass in the other and reminded me greatly of Lt Winters from Band of Brothers!

All of these miniatures are cast without the “field dressing” that was attached to the helmets of many US Airborne troops who landed on D-Day. This actually increases their usefulness, as they can be used for any of the subsequent battles in Europe right up to the early days of the Battle of the Bulge. The miniatures are more in line with Perry Miniatures for size, rather than the more heroic 28mm scale favoured by companies such as Foundry. All in all, an excellent addition to an already excellent range. Currahee!!

“The Young Posse” for Gunfighters Ball