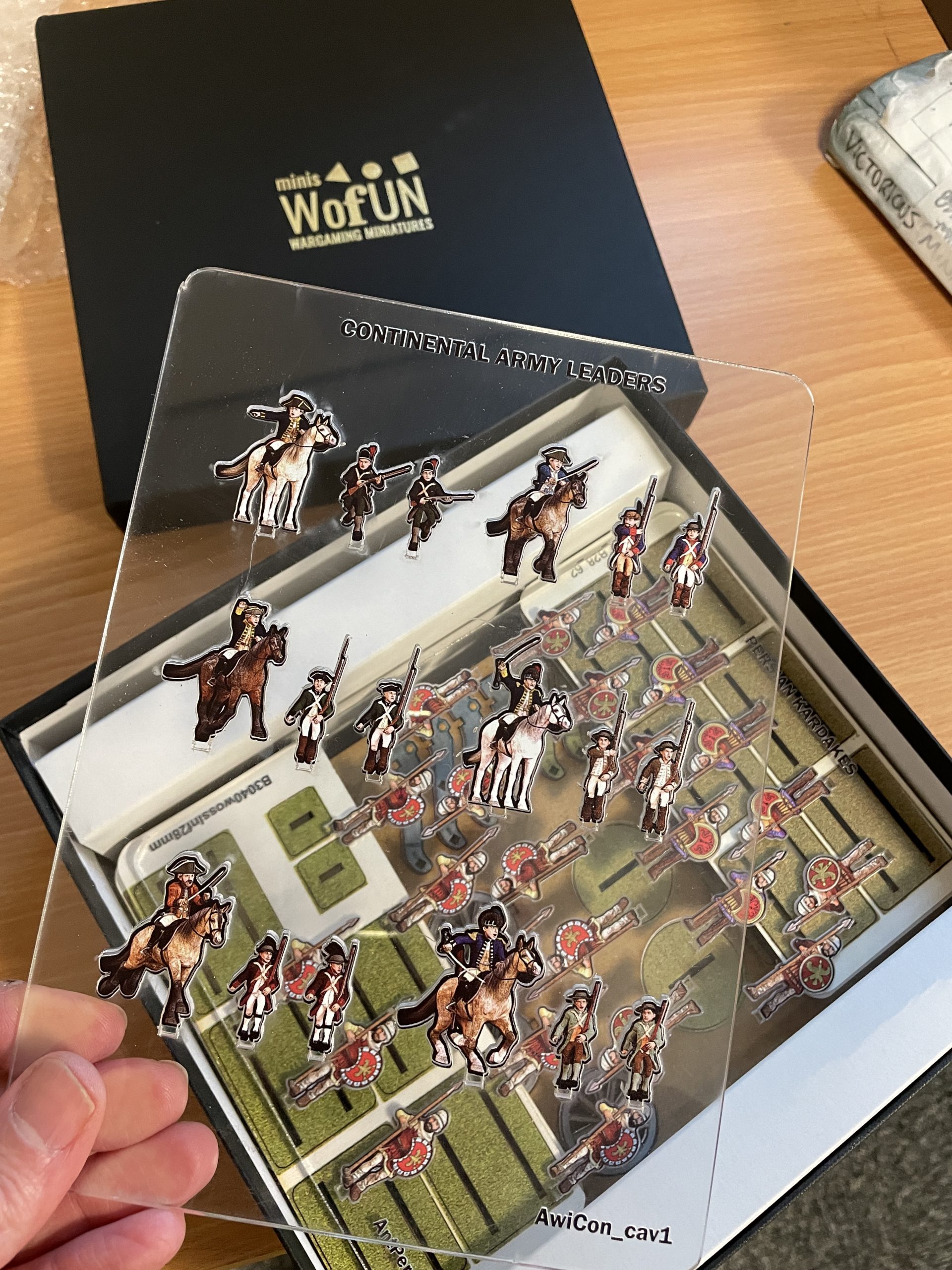 Wargamers can be a bit sniffy about using 2D figures, often saying that they are not “real” miniatures. If you hold the belief that if it does not weigh a ton in lead and takes you a year to collect and paint then it’s not real wargaming. Well, please read to the end of this review before making your judgement.

A look at a sheet from our sample pack.

Peter Dennis’ “Paper Boy” miniatures have been around for a while now, but recently a Romanian company called World of Fun (WoFun) have printed the range onto 2mm thick plexiglass sheets. You can simply push the miniatures out of the frame and pop them into the MDF bases provided. The miniatures and the bases are in full colour, so they can be used straight from the box. The ranges come in both 28mm and 18mm so, we’re taking a peep at a variety.

We’re looking at some 28mm armies – French and British for the Napoleonic Peninsular War. Each of the frames contains 11 push out blocks of 4 infantry, one of which is the colour party, as well as a single NCO and officer. This allows you to make a battalion of 40 soldiers with colour party and officers out in front for a total battalion numbering 46. The cavalry frames contain nine blocks of three horsemen on each frame. Artillery comes on an MDF frame and contains four artillery pieces, with a plexiglass frame of two French and two British crews as well as two mounted officers. Also included are light infantry for both French and British, Highlanders and even Portuguese allies.

A full Napoleonic Peninsular War collection looks every bit as impressive as an army of figures!

18mm AWI continentals, as well as some 18mm Persian Kardakes infantry from the range of the Ancients, were also included in the lot of samples we received. These are really colourful and excellent depictions of the troops, as you might expect from an artist of Peter Dennis’s calibre, and just a small sample of all that’s available. There is ACW, Jacobite, Wild West, Ancients, Dark Ages, and even more exotic periods, such as Aztecs, Incas, and French Indian War.

The WoFun website allows you to order these (and the rest) as individual frames, starter packs, or whole armies. You can also select what kind of bases you would like, allowing you to base the miniatures to suit your preferred ruleset rather than always having to have big battalions based in a certain way.

When unboxing, you can opt to simply put the miniatures in the stands, play your game, then take them back off the stands again and pack them away. However, another option would be to glue the miniatures into the stands and decorate the bases, just as you would with your 3D sculpts. The MDF bases that come with the sets are sturdy enough and could certainly be used to enhance the look of your army. MDF buildings are also available from WoFun, which are pre-coloured and usable straight out of the box, so that’s great for the completionists out there.

Getting gaming straight away

This review pack has given us a good taste of what’s on offer from WoFun and the appeal is most apparent to us when we think about dabbling in something new. Perhaps we’re tempted to try out some Ancients gaming in MeG or DBA – we could order a box of Greeks and Persians and get playing a lovely looking wargame the day they arrive!

You get enough French Indian War miniatures on these frames to be playing Muskets and Tomahawks straight from the box, and the same is true with the Wild West set or even the AWI sets.

Any system that uses bases rather than individual miniature casualties (or base widths for movement) could be used with these miniatures, although the boxed sets do come with a fast play set of rules included if you fancy giving those a go instead.

In these days of next day delivery, social media immediacy, and downloadable video games, many crave more instant gratification. If you’re less inclined to put in the time and effort required to collect and build a huge wargames army in plastic or metal, WoFun is a fine option. They could be a great way to get newbies involved in the hobby too – open the box, assemble the armies, and off they go.

When done the armies can pack away to be taken on holiday or round to a mate’s house with little chance of significant harm.

This is a great product that deserves to be taken seriously as a wargaming option and, whilst you may not want all your collections to be in 2D, WoFun’s offerings are well worth considering.