Women at War in the Classical World 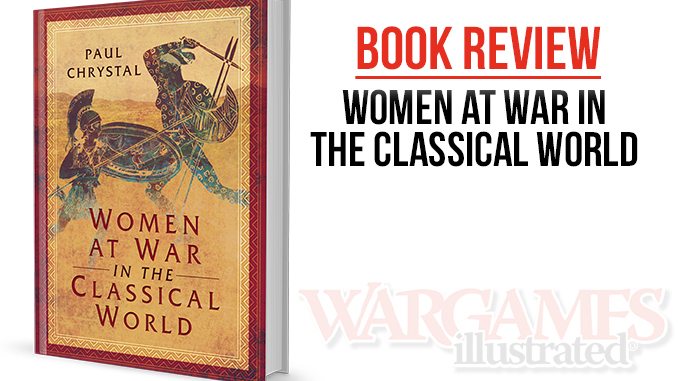 The story of women at war is growing in visibility within society and our hobby. Previously they were treated as mere footnotes if at all, but this is thankfully changing though there is a still some way to go. Entering this arena is the latest offering from the prolific Paul Chrystal, dealing specifically with women at war in the Classical World. This is, however, primarily the classical world of Greeks and Romans with little deviation. The work consists of 249 pages of text plus 8 pages of photographs, with an extensive bibliography, notes, and two indices. The book is split into four parts, covering Greece, Women as Victims of War, Rome, and Warrior Women in the Arts and Entertainment.

This book is part analysis and part collection of women in classical history. Having to collate this from the available sources is no mean feat and the author shows he has done the research. That results in a comprehensive run-through of women available in myth, legend, and history. There are niche stories from the depths of Greek mythology, and the surprising origins of words (candaulism), and where possible Chrystal has provided more information around particular women; Agrippina, Zenobia, and Queen Tomyris of the Massagetae all have interesting stories. The two indices are split into a standard one and one for just the women named in the book, which was a nice touch.

The book is a combination of encyclopaedia and narrative analysis, though it does not quite succeed as either. The encyclopaedic parts would have been better placed together, which would have made the analysis easier to follow. Also, the nature of primary sources from the ancient world dictates that we only receive perceptions of women from a specifically male viewpoint. The further we retreat into the past, however, the more pronounced that becomes even as legend and mythology take over from historical evidence. There is no getting around that, yet in Women at War in the Classical World telling the stories from mythology and legend subtract from the historical utility of those tales. There are a number of spelling mistakes, pointing to a lack of editing and proofreading, but nothing that really spoils the read.

This is an interesting take on a lesser known subject, yet feels like a beginning rather than a definitive statement. I both enjoyed it and found it disappointing; enjoyed the snippets about characters I have not encountered, disappointed that the analysis was spread over many pages. The scenario possibilities are not as numerous as you would expect yet the death of Cyrus and the part Queen Tomyris is a good one. There is much made of women partaking in sieges and attacking invading troops and these could be added into other games. This would work best in those games set in urban environments. A book that is decidedly interesting and well-worth a read for all people.