With SOE in Greece. The Wartime Experiences of Captain Pat Evans 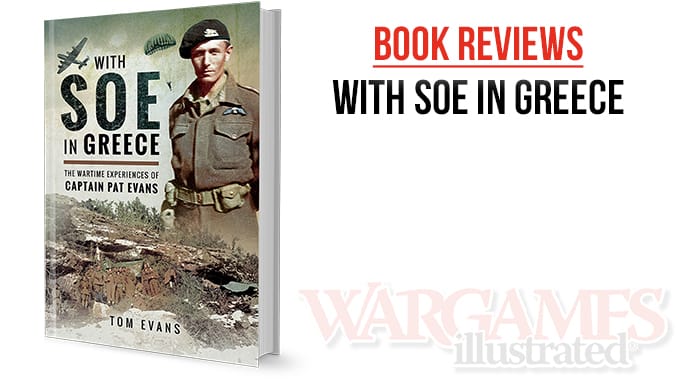 “With SOE in Greece” takes the reader on a journey with Captain Patrick Evans, SOE to the rugged hills and forests of Western Macedonia during the last two years of the Second World War. Based on the author´s private collection in addition to archive documents, the exploits of an SOE mission to spark guerilla warfare in this remote yet strategically important region are thoroughly reconstructed. Subjects of the book are partisan attacks on several pro-Axis units, sabotage and demolition missions as well as the internecine quarrels between the various Greek and Yugoslav resistance movements that culminated in straight-out civil war and ultimately played into the hands of the Axis.

“With SOE in Greece” is not a book that every wargamer needs to have on the bookshelf for two reasons. Firstly, partisan warfare in general and the Greek resistance movement in particular are very specific subjects and thus are rarely depicted in typical Second World War wargames. Secondly, the book dedicates a large proportion of its 160 pages to political issues or portrayals rather than descriptions of sabotage missions or combat as they can be usually found in first-hand wartime accounts. However, for wargamers with a keen interest in the subject, the book is a wholeheartedly recommended read and a great source of inspiration to create specific narrative scenarios. Tom Evans describes individual equipment and engagements in great detail and the hitherto unpublished pictures provide wonderful references for themed forces.