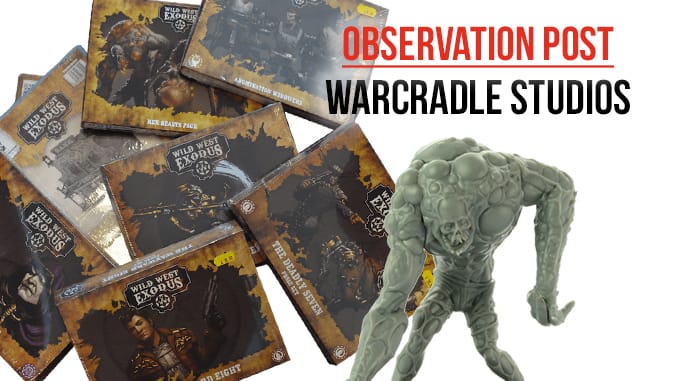 Our friends at Warcradle Studios sent us a bumper bundle of box sets for their Wild West Exodus game, an ever-expanding range of figures and scenery for a sci-fi Steampunk background that is full of deadly adventure.

The boxed sets sent our way represent factions or Posses from a number of origins. The Wayward Eight and the Deadly Seven are humans, heroes and / or villains of the Wild West with advanced techno-Steampunk weaponry mixed with more traditional trappings.

This blend of technology with the more mundane is challenged by the upcoming Absolute Power, part of the Hex faction and the posse of the Third Man. Alongside this formidable Hex Boss is his loyal guardian Kreechur, the insidious Garratt Morden, the scheming Megan Wild, the vengeful Maria Torres-Villa and the traitorous John Hunter Bennett. The set also comes with a Hexalith, a mysterious totemic idol that the posse can draw power from.

With such powerful adversaries in the world, the followers of Order require some support, and this comes from the first of the God-like Cor Caroli to walk the Earth. Maraka leads her Divine Intervention to deliver humanity from the clutches of the Hex. Fighting alongside their leader are the powerful warriors Haan, Vulana, Mithun and Siraj, each encased in heavy armour and wielding a variety of advanced weaponry.

The greatest scientific minds of a generation have allied themselves into the Covenant of the Enlightened. Through science, death is held at bay with the mortally wounded restored as a construct in service to the Lords and Ladies of the Enlightened. One such type of construct is the Abomination Widowers, who, with their spider-like mechanical legs means they can climb across all sorts of terrain, appearing from unexpected vantage points and making great use of their deadly Reaper Rifles.

Lastly, there are the monstrous and volatile Hex Beasts, twisted, infected creatures that are not only common amongst the armies of the Hex but may also appear in other armies should tainted units fall to their corruption and transform.

Such a wide ranging and varied background needs some unique scenery to act as a backdrop, and this is offered by the range of themed MDF self-assembly items available. Two such pack examples are from the town of Red Oak, with the Red Oak Bank and a Gallows and Clock set. These are presented in a blue-ish colour but are full of details that reflect this alternate version of the Wild West. They appear fairly easy to build and would make great additions to the tabletop.

The alternate reality universe of Wild West Exodus continues to expand through the use of multi-part resin miniatures and a complimentary range of scenery. The level of quality of the products on offer is of a consistently high standard, and is well worth the level of investment for those looking for something different to the normal sci-Steampunk background.