WI358, August: From the Editor 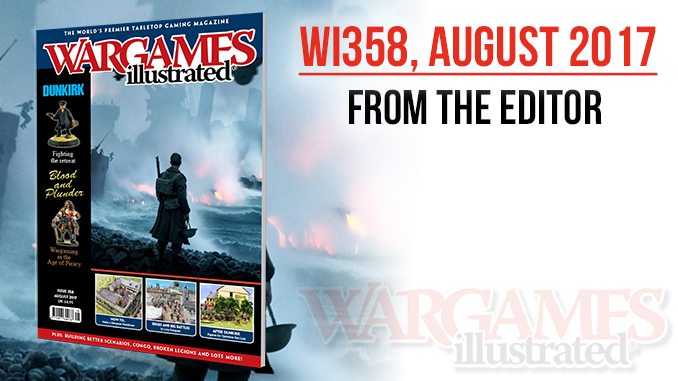 The latest issue of wargames Illustrated is available now. Here’s what Dan Faulconbridge has to say in his editorial.

Sometimes we just have to hope that as fellow wargamers you have been as inspired by something as we have. In this case that something is the new Warner Bros Dunkirk movie, which has sent all of us here at WIHQ scrambling for our Early War figures and taking in some tabletop action inspired by the on-screen actions of messrs. Tom Hardy, Kenneth Branagh, Cillian Murphy and co.

So, as inspired as we were, we decided to ask our contributors to come up with some ideas based around wargaming Dunkirk and supply us with content which they want to share with their fellow gamers. The result has lead us to take a close look at the game-able actions which took place during the later stages of the German Blitzkrieg through Belgium and France, and the British and French resistance and ultimate withdrawal. I hope you like what we have come up with and have been inspired yourself by the new movie or (preferably!) will be inspired by the content of this magazine.

Away from the fields of France and Belgium, we take in an eclectic mix of articles which cover: piracy, dinosaurs in Congo, big battles and sieges in Lion Rampant, buildings farmhouses, converting crusaders, creating scenarios and more!

Building Fort Vaux for The Wargames Table | From The Vault

Can you play a Napoleonic skirmish game using medieval rules? | From The Vault

Allan Quatermain and The Lost City | From The Vault

Action at Ben Dibanana: An Account of a Bolt Action Tank Wars Game | From The Vault