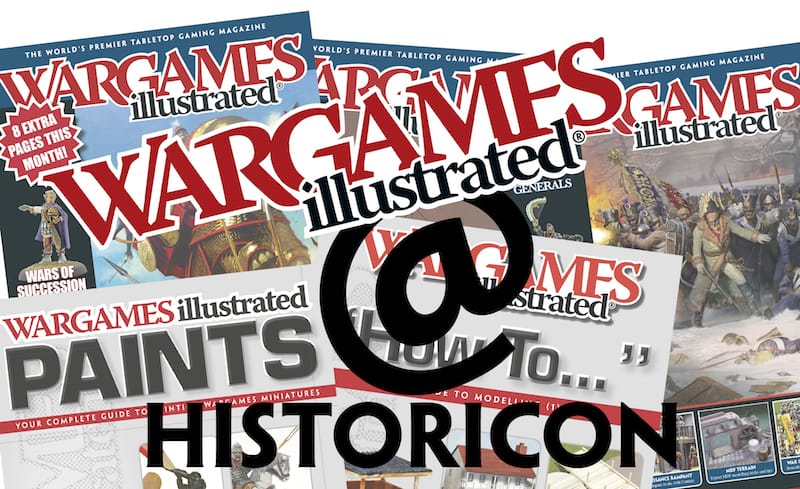 We’re looking forward to our regular trip across the pond to our favorite US convention – Historicon.

This year Wargames Illustrated will be forming a posse with Perry Miniatures and Nick Eyre of North Star and we hear 4Ground will also be in attendance, so we’re looking forward to being a part of a large UK contingent at the Lancaster Host for the convention.

You can find our trade booth at the entrance to the Vendor Hall. We will have the latest magazine, back issues, slip cases, ‘How To’ and WI Paints, along with our Giants in Miniature figures range. Subscriptions are also available and it will be the only chance this year (in the US) to get hold of our show exclusive Druid figure. We will be trading on Thursday afternoon, all day Friday, and Saturday morning.

We will be running the regular HMGS/Wargames Illustrated painting competition again this year ON THE SATURDAY. Regular head judge Dave Taylor will be assisted by his able team and guest judges The Perry Twins.

Award winning GM Bob Giglio will be running the Wargames Illustrated game again this year. Here’s the background info: Dunsterforce 100th Anniversary Battle – Menjil Bridge, 12 June 1918 12 June 1918. First action involving Dunsterforce in the Caucasus was against supporters of the Jangal Movement under Mirza Kuchak Khan, who led a Islamic rebellion against the Persian government. A force of 2,000 Jangalis with several machine guns defended the approach to the Menjil bridge, against a largely Cossack force supported by British armored cars, hussars and a plane, to stop Dunsterforce from reaching the port of Enzeli and then onto Baku. From the forthcoming Dunsterforce scenario book by Bob Giglio (available from Partizan Press).

SEE YOU AT THE CON!