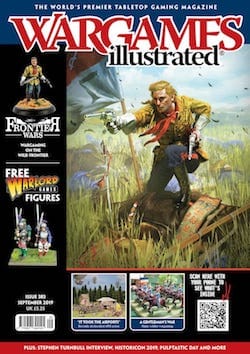 Buy this in Print There is something particularly evocative about warfare on the frontiers. It’s easy to conjure up images of fighting on the great plains or mountain passes on the fringes of empire. In this issue of Wargames Illustrated we explore some of the wargaming potential offered by Frontier Wars, taking you from the Wild West to native Australia, the Massachusetts Bay Colony to the Khyber Pakhtunkhwa. Touching on about 0.01% of the wargaming possibilties of Frontier Wars, but providing you with plenty of ammunition to push further into the interior. Outside of our theme content we take an in-depth long at the recent HMGS Historicon convention which took place at it’s new venue in downtown Lancaster, Pennsylvania. As well as a look at some of the best games (p.80), Observation Post (p.8) is a ‘Spotted at Historicon’ special – taking in some of the new and recent US releases at the show. OBSERVATION POST A look at new and forthcoming products in our hobby, with a focus on what we spotted at Historicon 2019. THEME: FRONTIER WAR Rolf Grein introduces us to this month’s Frontier Wars theme. COVER MOUNT FOCUS: LETHAL LANDSKNECHTS A look at the most feared, ruthless and flamboyant mercenaries who ever fought across the battlefields of Europe. THEME: “THIS BLACK AND FATAL DAY” Robert Giglio and Jefferson Hobbs outline a typical frontier action and offer some advice on the wargaming potential behind the Battle of Bloody Brook, 1675. DESIGNER’S NOTES: A GENTLEMAN’S WAR Howard Whitehouse discusses his ‘shiny toy soldier’ rules, his influences and more. THEME: AUSTRALIAN FRONTIER WARFARE Rolf Grein returns to explore the clashes between the British army and settlers against the tribes of aborigines that resisted settlement in Australia in the late 18th to early 20th Centuries. “IT TOOK OVER THE AIRPORTS” Colonel (Retired) Bill Gray digs into the ‘history’ surrounding recently declassified information regarding the use of British airships during the American Revolution. THEME: GEORGE ARMSTRONG CUSTER AT THE MOVIES Nick Buxey takes us on a journey into the realms of frontier legend. THEME: PAINTING CUSTER By Ben Macintyre of Demon Brush. TALKIN’ TONKIN We speak to David Marshall about the construction of the award winning Tonkin 1884 table which demoed at Salute 2019 and attracted a great deal of attention for its sweeping vista and superb detail. BRISTOL DOWN Pete Brown takes us to the North West Frontier, for some inter-war gaming with downed pilots and hostile natives. INSIDER INTERVIEW: DR STEPHEN TURNBULL We pose some wargamers questions to Stephen Turnbull – Samurai-era expert. HISTORICON 2019 For the third time in as many years, the HMGS flagship convention – Historicon – changed locations. Change can be a difficult thing for
If you are seeing this message after signing in, PLEASE PRESS THE BROWSER REFRESH BUTTON