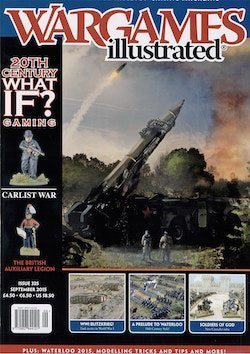 Theme: The Essence of Wargaming? In our lead article for this month’s theme, we discuss the world of ‘What if…?’ and how it relates to the hobby as a whole.   In search for Blitzkrieg A look at World War I tank tactics and how to create an army list using Great War rules for Flames of War   Whitehall Down! German Operation Sea Lion in microcosm as Winston Churchill and assorted British resistance fighters battle with glider-borne Fallschirmjager in Whitehall.   Romance of two kingdoms Scott Perry presents a study of the British Auxiliary Legion during the Carlist War.   How to…Create your own Waterslide transfers Paul Davies needed to re-decorate his 20th century buildings but he had a particular set of designs in mind   A prelude to Waterloo – 18th Century style Assorted noble members of the Military Gentleman’s Forum attended Partizan 2015 in Newark with two interesting takes on Waterloo Anniversary gaming.   Operation Mikado During the 1982 Falklands War, the British SAS were tasked with planning an assault up Argentina itself. The Raid never took place but Roger Gerrish asks ‘what if…?’   Guerrillas in the Mist Nick Buxey recounts the tale of guerrilla operations and the men who hunted them during the American Civil War.   Designer Notes: Third Generation Warfare The author talks us through this new set of Cold War era rules and accompanying comprehensive data book.   Modelling tricks and tips: Flagstone Terrain Paul Davies returns with his thoughts on how to create areas of flagstone for the wargame table   More Great War Tanks The Flames of War team presents a guide on how to integrate French tanks into your Great War games.   Figure Spotlight: A Vehicular Variety This month’s in depth look at some new figures this month it’s Mantic trucks.   Designer Notes: Doing God’s Work The author ‘s guide to his new soldiers of God crusaders era rules.   Show Report: Battlegroup South 2015 A showcase of the best games to be found at this show held at the Bovington Tank Museum in Dorset   Great Warriors: German Grenadiers A brief, informative look at the reality of the fighting men behind the Warlord Games plastic boxed set.   Fighting Talk: What? Erloo Barry Hilton recounts his experience of the 200th Anniversary of Waterloo
If you are seeing this message after signing in, PLEASE PRESS THE BROWSER REFRESH BUTTON