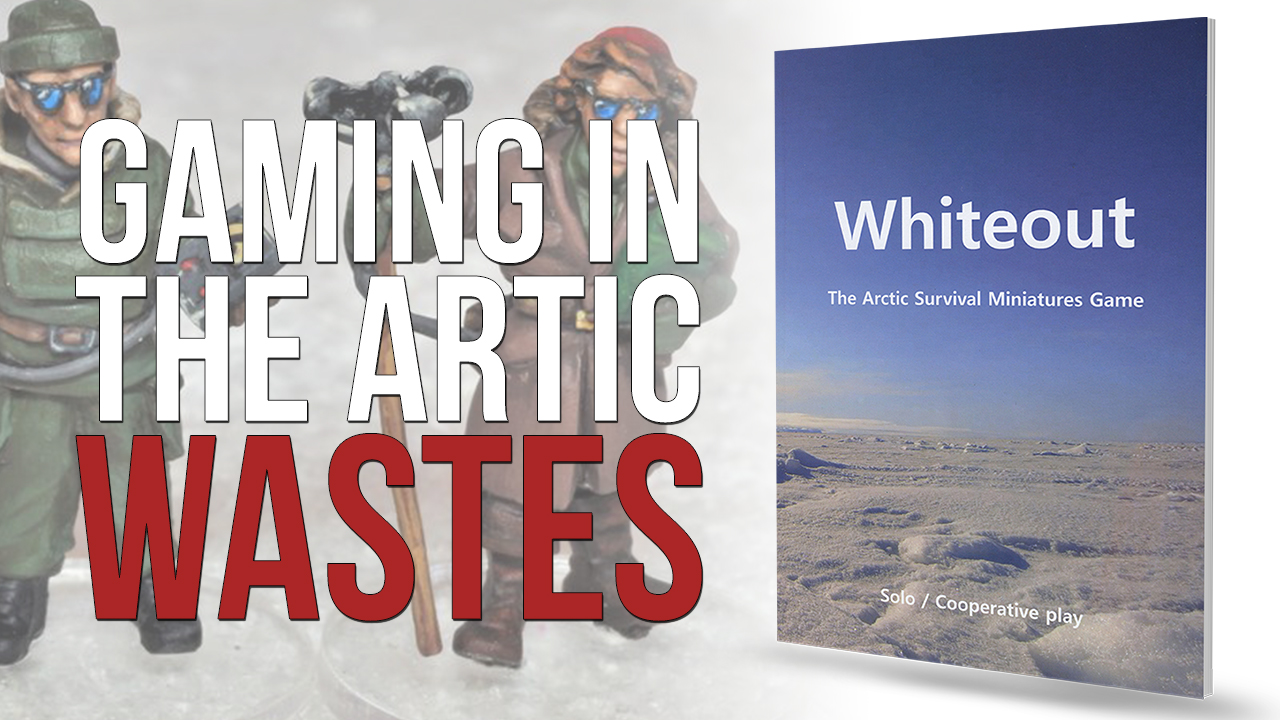 Whiteout: The Arctic Survival Miniatures Game is a relatively new rulebook release by Sally 4th, following a successful Kickstarter. This is a 91-page A4 softback book, with a decidedly cinematic approach to gaming and a fairly unique angle to gameplay.

The book begins with an explanation of the core concept behind the game. Rather than being a game of opposition, this is designed to be a game played solo or as a cooperative experience with others against the ‘AI’ of the game. A handy overview explains the other core concepts, including drawing Terrain Cards to move from area to area, plus Encounter Cards to resolve. The game is noted as using D6 and a single D4, plus a number of other items to enable Fate and Fortune rolls

Next comes the method used to generate your ‘Party’ of characters, which may be used as part of solo or cooperative play. This is achieved by picking an archetype, then rolling for various other facets, including Traits. A handy example takes you through the process, simplifying an already fairly streamlined process. Alternatively, players may instead roll for their stats, using a D6 roll for each.

Creating a ‘board’ for the game is fairly unique. Rather than beginning with a complete layout, the game works by using terrain squares of either 10” by 10’ or 12” by 12”. A figure enters one side of a terrain square, then moves through it, resolving any Encounters along the way. The nature of the Terrain is defined by the drawing of Terrain Cards, and a new terrain tile is placed accordingly. A new Encounter card is drawn, the noted encounter is played out, and the whole process begins again. Two helpful examples of the process are offered, using photographs of the stages and a text description. Movement is ended by Encounter cards which make the party camp for the night, although the gameplay continues, with a roll of the Fate and Fortune D6 die to see how the party’s members fare overnight in the Arctic. An explanation of the three sets of cards, Terrain, Encounter and Equipment, are offered, with a QRF code which links to downloads at the Sally 4th website. The composition of each deck is offered, with a conversion chart for the use of standard playing cards instead.

The next set of pages explain the basic turn sequence, the rules for shooting and fighting, plus the various types of equipment that are available to the characters. The rules cover the reaction of the ‘adversaries’ encountered on each terrain tile.

A facet of the rules is the use of vehicles, and suggested terrain tiles are covered. There are various types of tile that reflect the possibilities of an Encounter upon them, ranging from igloos to crashed aircraft, submarines to trapped ships. This segues into the methods used with regard to resolving said encounters, using a simple AI system to maintain the solo and cooperative nature of the overall rules system.

Finally, we have the various scenarios or ‘Missions’ that may be undertaken by the party, which are outlined in plenty of detail. The remaining pages of the book are photocopiable versions of the various gameplay and character cards, including equipment, terrain and encounter cards, plus the tables that are rolled upon to create a character. Everything needed to play the game is included.

This is a simply but fairly well laid out book, easy to use and very gamer friendly with plenty of explanation. The gameplay is akin to a roleplaying game on the tabletop, with some interesting mechanics and concepts. It would best serve as a part of a cinematic-style adventure, which the game itself happily acknowledges. Suitable miniatures are available from Sally 4th, covering pretty much every possible encounter and more, which are useful figures to have on the market themselves. Overall, this is the type of game that would suit a GM looking for to run a participation game at a gaming event, and good fun it would be as well.