What do we need, history or Hollywood? 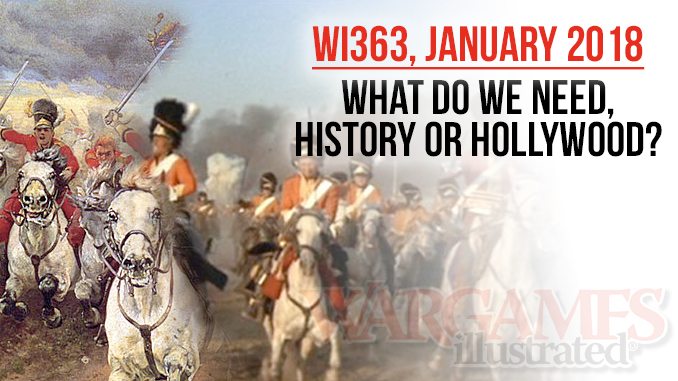 It’s the best bit in the movie, right? The Scots Greys charging to glory across miles of Ukranian steppe at breakneck speed. They float through a hypnotic slo-mo sequence before slamming into the French guns. Rod Bonaparte utters the wonderfully banal “..but I’ll match them with my lancers!” and Michael Wilding takes an early mud bath whilst doing his best impression of a cocktail sausage being fought over by five ravenous Frenchmen.

So how much hokum can you swallow? Full dress? The guidon? The distance covered and the speed? Marcognet’s missing division? An absent Sergeant Ewart and his Eagle? What about the ridge, the hedge-lined sunken road, the cropped fields? And why Polish lancers and not Jacquinot’s 1st Light Cavalry Division?

Be thankful the director didn’t crowbar in other clichés such as the 92nd grabbing at the Greys’ as they sped by. As a Scot I so want to believe in that but which cavalry commander would crash his regiment through a friendly battalion? Could Private Gordon Macbawbag successfully grasp a speeding horse and to what purpose other than the voluntary dislocation of his own arm? The rider is likely to have fallen off or thumped him with his sword pommel. The horse may have given him its hind pair right up the Trossachs. What was Gordon doing with his huge bayonet-tipped weapon whilst being dragged through a hedge by a frothing, half-tonne beast?

Frequently described as history’s most disciplined infantry, these veteran Highlanders broke into a fuzzy-wuzzy frenzy and tore off towards the enemy swinging from the stirrups of their countrymen. Blood pumping and patriotic but did this really happen? Could it be a compound construct of two centuries of romanticising our most celebrated triumph over the French? Is it fuelled by a 19th century political necessity to own the victory even though our ancestors constituted no more than 25% of the combined forces fighting Napoleon at Mont St Jean that day?

Having attempted the public slaughter of a sacred cow and set myself up for hate mail for the rest of my life this piece is trying to make a serious point. British heavy cavalry at Waterloo executed one of recorded history’s most perfectly timed battlefield counter attacks but for purposes of dramatic effect, the popular memory has been repeatedly sexed up.

The emotional stuff is red, white and blue brainwashing. You are either going to get over it immediately or never. Joe Public has long feasted on Lady Butler and countless other pieces of dramatic art. Historians serious and otherwise have penned millions of words and of course there is a movie which consolidates the pre-cinematic collateral. Associated language has compounded the powerful imagery. Referring to the involvement of the Union Brigade as a charge is where it begins. The cavalry is often described as ‘smashing’ into their enemies or ‘sweeping’ all before them. The words convey a sense of speed, distance and irresistible force. Each retelling adds a little more hyperbole. If logic is applied these romanticised interpretations assume D’Erlon’s divisions were yet to breast the crest. With the Allied cavalry stationed well back on the blind slope how could they have known where and when to charge? A visit to the field reveals all you need to know.

A sizeable portion of Napoleon’s I Corps actually reached the crest of the ridge. Although temporarily triumphant, the French were in some disorder along the sunken hedge-lined road. They were taking fire to their front and left. Beyond Picton’s depleted division stood the British cavalry. They and the lead elements of I Corps were visible to each other. The cavalry initially advanced up the gentle back slope into contact and not down the slightly steeper south facing slope as portrayed in many reconstructions. The speed of travel was dictated by the animate and inanimate obstacles hindering manoeuvre namely; friendly troops and a sunken road lined with thick hedges. The attack was carried out at a walk or trot. It will have involved a lot of jostling, pushing, squeezing, contracting and expanding of lines. Definitely not Hollywood in the visual sense but brutally effective nonetheless. The disordered cavalry bumped with intent into the even more disorganised infantry bustling them against the confused mass of their fellows behind. This gathered momentum until I Corps fled back 1,000 yards toward its start line. The pursuit is more likely to have looked like a massive line of police horses crashing into a rampaging G20 riot amidst dense, lingering fug from the cannons and muskets of both sides. Initial impact speed may have been about 10 mph. The distance covered to contact was probably about 400 yards at most but more likely less.

So what? This phenomenon of embellishment is not new and it is ironic that ancient tales written in archaic language with exaggerated descriptions of battle are dismissed as allegorical or fantasy whilst more modern enhanced texts are likely to be accepted with little challenge. People have always had a need to romanticise and magnify. Drama increases the interest generated by a story and influences those with little motivation to question what they are told. Most history has already had the Hollywood treatment before Hollywood gets anywhere near it. Showbiz did not start in California it predates the written word making it perhaps the world’s second oldest profession. When literacy and education were privileges and not rights we believed what we were told. Those doing the telling usually held the power. Wordsmiths delivered what they were paid to produce to ensure the desired outcome amongst the masses. And that is the point. Hollywood is no more or less guilty of sprinkling on the stardust than many history books. Where figurative becomes fact is the danger zone but regrettably, it’s all too late to change.

That said, what do we gamers really want? As long as no one confuses the fantasy of the tabletop with the unspeakable carnage of reality we are on harmless, leisure filled territory. Those who find that unpalatable should stick to board games which are abstract enough to create some distance. Figure gaming is for hopeless romantics each of whom see the Hollywood curtains drawn back every time the toys come out of storage.

Without getting too heavy about it, Hollywood with all it comic book histrionics and wargaming with parallel but less graphic improbabilities serve the same purpose as football matches. All of these pastimes allow us to enjoy war without the disgustingly traumatic bits – those being, most of it. The atavistic desire to beat one’s enemy is played out without a single warrior being carried home upon his shield. All wargaming is Hollywood and Hollywood portrays war as many gamers imagine it would be. Its symbiotic, peaceful and fun. Regrettably, history tends to be untidy, uncomfortable and tragic.