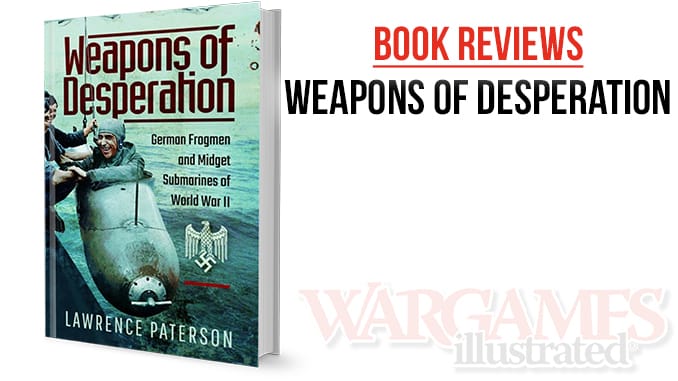 The Kleinkampfverbände, literally “small battle units”, were special in Hitler’s Kriegsmarine, no doubt. While U-Boats fired torpedoes at targets, some men of the Kleinkampfverbände actually rode them to the target. Yet these were no “suicide missions” in the Japanese style. And while midget submarines and small boats full of explosives have a whiff of desperation about them, they are actually very viable weapons, especially in littoral warfare.

Paterson’s book on the “German frogmen and midget submarines of World War II” (subtitle) provides a good survey of warfare as waged by divers, the misleadingly named “human torpedoes”, ultra-compact U-Boats, and the Linse boats in the later war years. There’s heaps of detail, so any student of the Kleinkampfverbände will rate this as an essential addition to their library. Wargamers will certainly find inspiration for a number of skirmish scenarios with a different twist – though pitting the 25 ft “Neger” against a cruiser or aircraft carrier might present some problems of scale. But a scenario featuring Canal Defence Lights and SS Kampfschwimmer struggling to save/destroy a bridge sounds playable (and would be actually based on events at Remagen).

Now I mentioned heaps of detail and SS Kampfschwimmer … what “Weapons of Desperation” lacks is actual technical detail on the craft and equipment used. And Paterson shrinks away from probing too deep into the fascinating, yet often puzzling aspects of the Kleinkampfverbände, like the bewildering mix of personnel from several branches of the armed forces, or the whole question of drug usage on missions.

Those looking for “event history” and raw data will be fully satisfied by the book, but tech-heads and anybody expecting analysis might have to start their own research. At least Paterson provides an ideal starter for this.