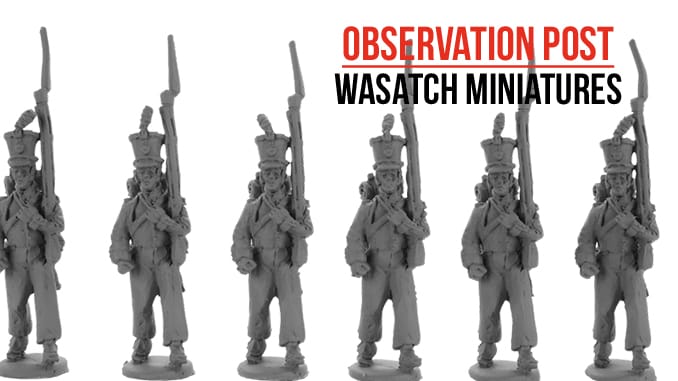 Wasatch Miniatures are marketed by GAJO Games and offer both painted and unpainted miniatures from their own and other companies ranges. We’re taking a look at the 28mm French and Indian War and Napoleonic Dutch ranges, plus the painted 15mm Moderns on offer.

For the French and Indian War, we have WMFIW39, a pack of two British Pioneers in Colonial uniform. These are engineer-types, with aprons and axes, ready to create wooden structures and barricades or help to cut their way through the ranks of the enemy. These are characterful miniatures with an excellent level of detail, an interesting addition and not often seen.

The second pack is also from a less well-known aspect of a conflict, Napoleonic Dutch Line Infantry from the 1815 period. This is WMND101, Dutch Line Infantry Marching, a six figure pack in a variety of poses. The uniforms and headgear are very well rendered, and the faces have just enough variety to offer some difference when used ‘en masse’.

The final two packs (seen below) are taken from the Team Yankee 15mm Modern range. This is a complete Soviet Motor Rifle Platoon, 24 plastic figures, all of which have been suitably painted. The pack comes with bases and a unit data card, giving you everything you need to base up the figures and get them into action.

With access to figures from their own ranges and those of top manufacturers like Old Glory, Peter Pig and more, this is an interesting company. They will also respond favourably to customer requests and can provide figures from a number of periods. The painting is of a good, basic tabletop standard and its always useful to have access to a service of this type at a reasonable price.