Wars That Never Were 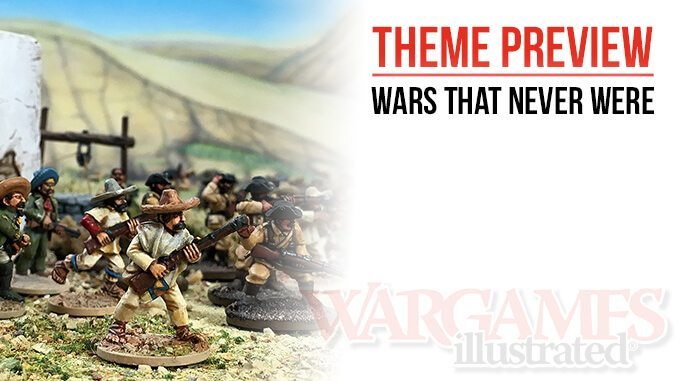 In the 1960’s Charles S. Grant went to war with his father and wargaming pioneer Charles Grant. The struggle between Lorraine and the Vereingte Freie Städte would take the Grants into the wonderful world of fantasy wargaming.

Of course nowadays with that phrase comes images of elves, goblins and animated skeletons, but ‘Wars that Never Were’ like those of the Grants are not the high fantasy of Tolkien or Games Workshop but rather the alternate realities which are played out on the tabletops of (more discerning!) wargamers on a regular basis.

For this month’s theme we take a look at some of these fantasy wars, with Charles S. Grant telling us about his ongoing campaign, Barry Hilton sharing his setting of wars in an alternate 17th Century, Mark Hannam providing us with gaming ideas for The Winter of ’79, Paul Barnett introducing us to a new front in World War One between the USA and Mexico and Alan Perry and Don Effinger providing us with (and playing out) several scenarios for British Intervention Force action in the American Civil War. All skillfully framed by Gary Mitchell in his ‘Wars that Never Were.’

WARS THAT NEVER WERE
Gary Mitchell explains the concept behind this month’s theme and provides his top suggestions for ‘Wars that Never Were’.

IMAGI-NATIONS
Charles S. Grant explores this aspect of gaming and adds his thoughts on creating your own 18th Century nation.

THE BATTLE FOR FORT ONTARIO
Don Effinger presents a series of scenarios for the British Intervention in the ACW, which are then played out and ably supported visually by the Perry Twins.

THE ZIMMERMAN TELEGRAM
A look at the potential for fighting World War One on US and Mexican soil.

WINTER OF ’79
Forget what you think you know, get to the army surplus store and head back to the late 1970’s in the Disunited Kingdom. It’s anarchy in the UK as Mark Hannam provides an insight into gaming during a more modern civil war.