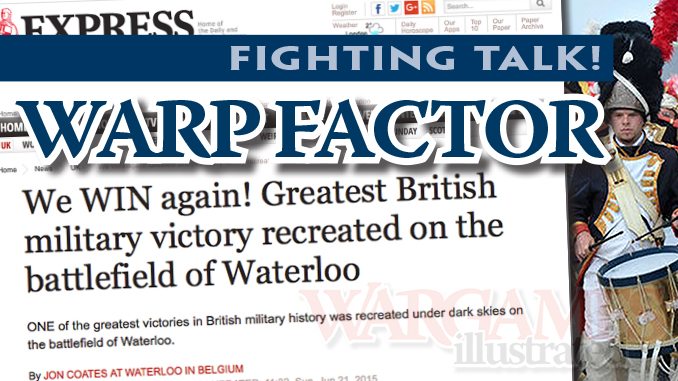 Author and gaming provocator Barry Hilton rails against post-true, false true and anything but the truth.

With a New Year’s resolution predicated around living closer to the edge this piece follows through by ploughing into the minefield at full tilt. My need to write it has been slowly fermenting via a series of unconnected yet not unrelated conversations going back a long way.

Gas bubbles break the surface occasionally on various chatroom threads in response to some perceived provocation, but until now I have mostly managed to keep the lid on the bubbling cauldron. The straw which rendered my camel hors de combat was a recent conversation about the great British victory of Waterloo. The internal
alarm sounded ‘General Quarters!

Having completed all my nerdy research in 2015 to be a guide at Waterloo 200 I felt comfortable in articulating a simple contra-point: Of the 160,000 or thereabouts men present on June 18th, 1815 between 5 and 7% were English or Welsh. About the same percentage were Irish (ironically most probably in the majority, Catholic Irish) and around 4% were Scots. So, maybe 13% maximum of the total combatants or about 22% of the combined total of Allied soldiers engaged could loosely be termed as ‘of the Islands’.

Hardly a British victory then. Regardless, Waterloo has been appropriated and shamelessly milked to make Brits feel good and in a majestic double-whammy, tell foreigners a thing or two about them and us at the same time. Notwithstanding the long running joke pointed my way that all rivers of bile wend toward Blenheim Palace, the Waterloo facts prompted me to roll back the years by about one hundred and acknowledge that rather than being the master of marionettes, for once Corporal John has become an unwitting posthumous puppet. In his name the period of British military awakening 1685-1713 and more particularly its latter half has been used to ‘do a Waterloo’. At some point an unnamed individual coined the Pre-Tech Age meme ‘Marlburian Period’ and in the English speaking world, it stuck. A sort of early form of Spicer’s alternative facts.

My instinctive reaction throughout twenty six years of interest in this period has been to resist the desire to paint the British as martially superior. When writing about ourselves we British can be selective and somewhat delusional. It is a singularly unattractive characteristic which often uses Marlborough as the lance tip and has much traction with a significant body of lazy thinkers. The English, Irish, Scots and Welsh forces of the time were, relatively speaking, new entrants into the European arena – although many had served in mercenary or subsidy units for the Dutch, the Swedes, the French and the Imperialists since the Thirty Years war or before. British captains of men had held significant field commands, but none had been in the top jobs in their respective corporations. That suddenly all military excellence and innovation appeared to emanate from these shores is surely something to be proud of – but can it be true? If the platoon firing Dutch-English method was so effective why did the Grand Alliance lose frequently and spectacularly during the Nine Years War? If British cavalry was brave and aggressive why was it beaten by Jacobite and French Horse? If the generals setting a new benchmark possessed such tactical insight why was the Marshal duc de Luxembourg christened Le Tapissier de Notre Dame?

Wargaming has both its roots and core in the UK. Consequently self-aggrandising propaganda has become part of our tale. Like many countries we don’t look further than our coastline for answers. Along come articulate writers peddling their form of truth dressed up in a stirring narrative and the frame of reference is established. A point of view if repeated frequently can become accepted fact against which all challenges are robustly and often illogically rebuffed. The actual truth is surely far less tidy than an unshakable belief that we are simply the best at everything and all foreigners are a poor second. That remark may be interpreted by some as lack of patriotism. au contraire, I am patriotic despite the overblown rhetoric not because of it.

English language-dominated mass media together with our woeful collective foreign language skills have combined to isolate us from valuable non English sources of information. In an increasingly impatient and superficial world where no one wants to put in any effort who is going to be bothered challenging what we are fed in serious books? Compound this trend with the strong desire in many gamers to win at any price and wargaming clichés are born.

Our hobby is a game like Monopoly or Connect 4. Anything offering an edge is welcomed by some. Platoon fire capability, cavalry combat bonuses, troop quality ratings and superior commander ability are manna from heaven to the win-at-all-cost brigade. Beneath the Lily Banners 2nd edition contains the now infamous (to me at least) All or Nothing charge rule. I created this mechanic as an exception to be deployed in extremis. Disappointingly it has for a large number of players become the standard operating methodology for cavalry. Why? It gives an edge in combat. Its transfer to the Optional rules section of Beneath the Lily Banners: The War of Three Kings (a third edition due for release this year) is a deliberate circle of influence reaction to the high-jacking. Players must now actively discuss and agree to its use before invoking it. The All or Nothing charge is not a rule with pro-British bias, but it illustrates the point that often historical accuracy is subsumed by our need to win. More sinister still have been requests to include a national characteristics option in Beneath the Lily Banners. This is a perilous path to perambulate. It blunders around in a hazard-strewn landscape of subjectivity, opinion, racial stereotyping and xenophobia.

In line with that British fetish for self-flagellation I have chosen to throw
stones at my own house first rather than be impolite about someone else. The habit is however not exclusive to we Brits. Political regimes use it all the time. Didn’t North Korea recently beat Brazil 100 – 0 at football? It is the principle that we all need to be mindful of. The new buzz phrase to describe the dismissal of all other points of view in favour of your own is post-factual or post-truth. I sincerely hope that our hobby does not begin to suffer from this alarming epidemic any further than it has to date. Much evidence of the trend can be found creeping insidiously around the edges. Revisionist American histories of WWII are a case in point. These scholarly works often ignore the contributions of allies or choose to reinterpret data to form convenient conclusions which underwrite the author’s own arguments. A simple yet shocking for instance being a comparison of Normandy Campaign casualty rates amongst infantry units. Higher American losses prove firstly that American units did most of the fighting and more alarmingly that the Commonwealth troops were battle shy. Easy if you know how. What seems to escape the grasp of these writers is basically, everything else but the numbers!

Warping the past into a narrative which reinforces the objectives of those in power at any given moment in time is nothing new. We as wargamers need to look beyond Red-Top headline style history and try and make sense of all the variables which led to any victory or defeat. Otherwise, wargaming as a simulation is as realistic as The Apprentice representing the world of modern business.

OK, having pulled the pin on the grenade, I await the bang, smoke, shrapnel and dust!  In a pre-emptive strike I’ve moved house and am now living in a cave complex on the Ayrshire coast.