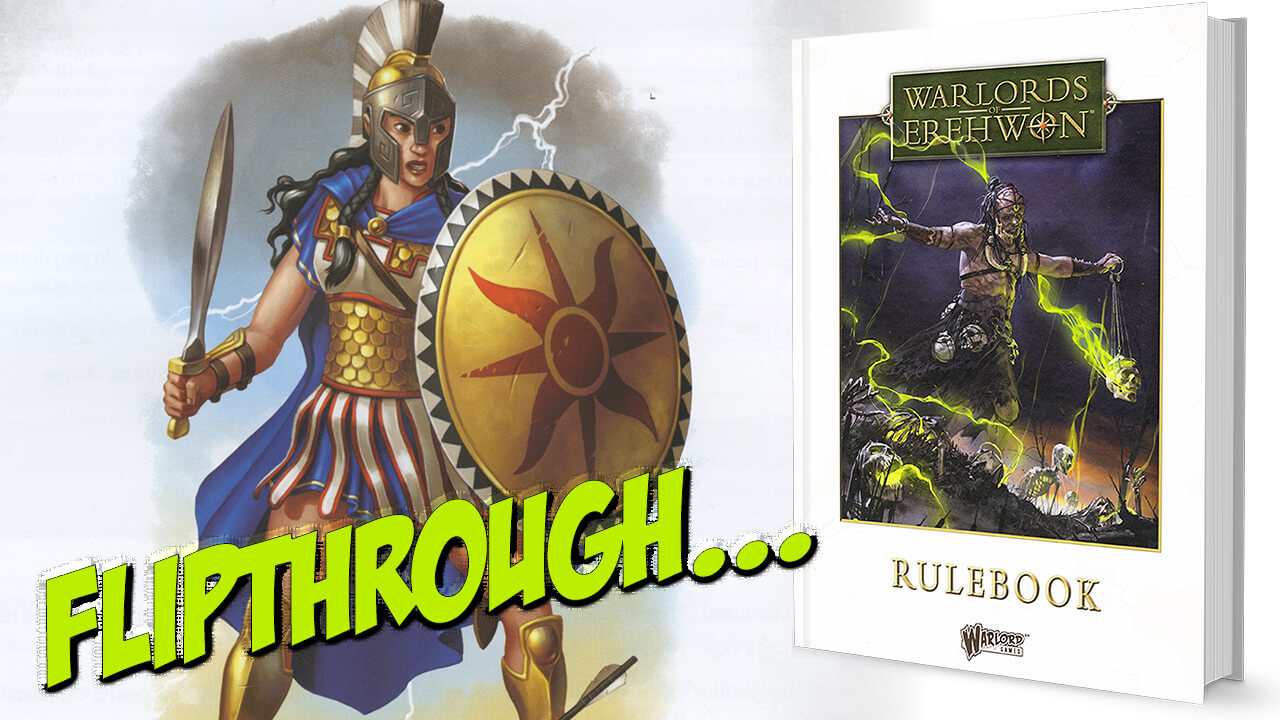 Warlords of Erehwon is a 248 page hardback book, authored by Rick Priestley, one of the most well-known game design authors in the hobby. Firmly adhering to a classic style of fantasy gaming that has seen a resurgence of late, we intend to cover the rules in detail as a Rules Showcase article in the March issue of Wargames Illustrated Magazine. Meantime, let’s Flipthrough book itself, published by Warlord Games.

The Contents page is rapidly followed by some very useful pages, in a section sensibly titled ‘The Basics’. Here, you get a full outline of what is needed to play, the use of stats and the main types of rules, the units which are usable, basing conventions and a handy guide to the various stages of the game.

A brief look at the structure of The Turn and the use of Order Dice and we’re on familiar Priestley/Warlord territory – the game makes use of different coloured order dice, which are drawn from a suitably opaque container, and allocated to units. This system will be familiar to those who have tried Bolt Action or Beyond The Gates Of Antares. Units can carry out those orders automatically as long as they have not incurred Pin markers, where an Order Test is needed.

A quantity of D10s are used to make all tests, whether Order, Shooting or any other. There is of course an appeal in  being able to use learned rules experience across genres.

Movement rates are fairly constant and obstacles have an effect upon the movement chosen, with a definition of said obstacles and the effects of terrain all quantified.

Shooting is outlined in detail, following the standard pick a target, check the range, add modifiers and then roll to hit. Tests are made on the Accuracy stat, with the target making a ‘save’ using the targets Resist stat. Fail to Resist, the target model is removed and the unit is given a Pin marker.

Simple, straightforward and intuitive, but well explained and exemplified in the rules. A useful summary, albeit in white on black type rather than visual, aids those who can read it to refresh their memories in game.

The Close Combat rules are equally intuitive, with only one figure from a unit needing to make contact during a charge move to initiate a round of combat. A nice touch is the opportunity for both sides to ‘fire’ with ranged weapons as they charge or stand to take the charge. Each figure able to shoot may also fight in close combat, and again this is all explored in an easy to understand layout, albeit amidst a wall of text. All this ranged and up-close violence can result in a unit feeling that discretion is the better part of valour, as reflected in the Break Test using the unit’s Command stats, modified by Pins.

The Reactions section explores the use of an Ambush order as an alternative to other orders, This allows a player to act out of the normal turn sequence and attempt to prevent the actions of an enemy unit within 20’. The Weapons and Armour which can be used range from the realistically historical to the extremely fantastical, whether a ranged attack from a Fire Cannon to the use of a Bloomin’ big axe or Improbably vast sword.

There are 7 suitably generic Scenarios included in the rules, all with well laid out instructions and maps. These are followed by a massive 115 pages of Army Lists, which cover the standard fantasy tropes from Barbarians through Dwarves, Orcs, Goblins and the Undead, with some less obvious choices coming with the Olympian and Monsters.

The List are clearly laid out, covering pretty much any collection to found in the average fantasy gamers cupboards or carry cases.

Warlords of Erehwon is based on Warband level fantasy warfare. If you are looking for ‘mass combat’ rules, then you need to look elsewhere. The rules system is an adapted version of the thoroughly play tested and commercially successful WW2 and sci-fi versions already mentioned. In that regard, it enables those familiar with either of those systems to access the fantasy genre but is still simple enough to encourage newcomers to the rules themselves.

A low figure count and a satisfyingly simple system are the main attractions here, as is a well laid out (if very text heavy) set of rules that support the gamer.