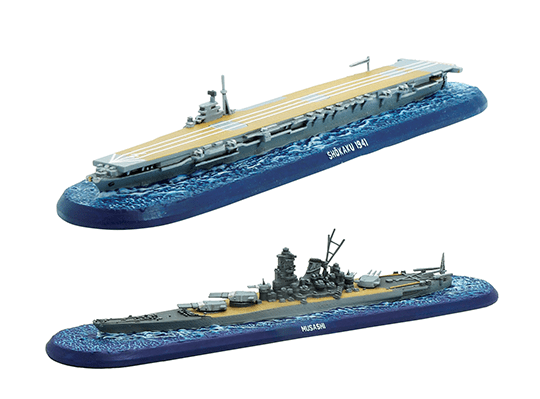 It’s been almost a year since we last looked at Victory at Sea, the WW2 1:1800 game of naval warfare from Warlord Games. Included in the releases we looked at in 2020 were flights of Japanese Mitsubishi A6M Zeros – those planes would have appreciated one of these new releases, the Shōkako-class carrier Shōkaku, to use as their home base.

This aircraft carrier is a hefty bit of flat-topped resin with three small metal parts to add a little height and detail to it. The nature of an aircraft carrier is that from above it looks like a rather characterless slab. We can’t help but wish that some planes or other details were present on deck to give it some variety. A bit of a missed opportunity.

Looking past that complaint it’s a pretty good replica of the carrier. There’s some decent detail down the sides and the flat top will allow you to add your own flights of planes on top. The only other minor critique we have is that the top surface of the ship seems to have some stepping lines, making us think that it was 3D printed and not quite filed flat before being cast. We’re getting picky but it’s such a large area that it becomes rather noticeable in the raw unpainted form. We suspect a spray of primer will reduce the obviousness.

You don’t get a lot of metal parts to add interest to the Shōkaku’s flat deck!

The Shōkaku (and sister ship the Zuikaku) were involved in a great many Pacific theatre engagements, going all the way back to Pearl Harbor and ending with the ship’s sinking during the Battle of the Philippine Sea so, you have a whole lot of gaming options.

The other vessel, the Musashi, is an absolute beast of a battleship. This is a real centrepiece model, as befits a ship that was about twice as large as any of its Allied adversaries and very marginally larger than her sister ship the Yamato. There’s far more detail to this kit too and it’s a more complicated build. You’ll need to take care when removing some of its ten extra parts from the two metal frames provided. The huge 18.1-inch guns are easy to snip away due to their sturdiness but the other details that are needed, require more careful treatment, especially the thinner parts. We clipped them off the frame leaving quite a bit of feed still attached, so as not to cause a lot of bending, then we trimmed the feeds off gradually with a sharp knife.

The frames of the Musashi’s ten extra parts.

Most can be clipped off close to the part itself …

… then trimmed them off with a sharp blade.

The large resin ship element here has far more detail from the top and looks very impressive on the tabletop. There’s a real sense of scale to it and even in its vastly reduced miniature form, the ship (and its huge guns) manages to look imposing.

Parts fit in place easily (after trimming the underside neatly) and can be fixed in place with a small amount of superglue. You may consider painting elements such as the guns before fixing them to the model to aid you in getting your brush to them from all angles.