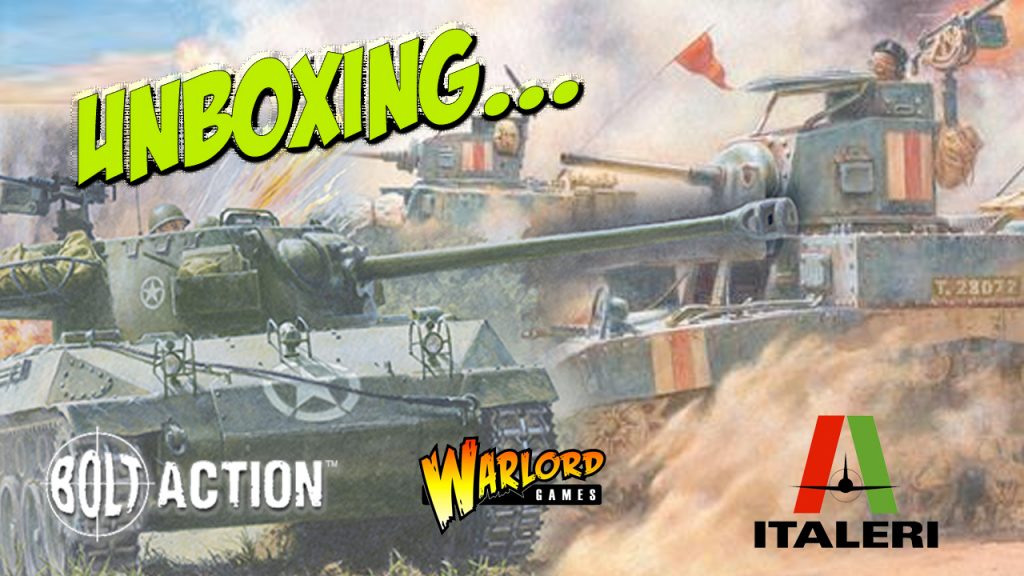 From Warlord Games, we have three armoured vehicles, the M3 Stuart, M8/20 Scout car and the M18 Hellcat, with some details on the kits and how they can be used together to create part of an Allied force.

Let’s take a look at some of the recent releases from Warlord Games, both as kits and their gaming potential.

M3 Stuart: A recent release, this is a single vehicle boxed set of the M3 Stuart tank from Warlord Games. Having previously offered this kit as a platoon deal, this may be one tank but has enough parts to be constructed in a number of ways.

This versatile light tank, nicknamed the ‘Honey’ due to its smooth ride, saw service in a number of variants and with all the main Allied powers in World War Two. The box contains parts to add sand guards for use in the desert war, a flamethrower and external fuel tanks for use in the Pacific, rounded or plate turret versions and five medium machine guns to add that extra level of anti-personnel firepower!

Serving from 1940 to 1943, the M3 tank excelled as a reconnaissance vehicle but was also used as a command vehicle and troop transport, being fielded without a turret. Being a light design, this small but mighty tank saw service even amongst the jungles of the Pacific, able to engage the Japanese troops who had very little to stop it with.

Versatile and widely used, this is a welcome addition to the arsenal of any World War Two gamer, with plenty of options to really let the modeller go to town on it. The kit also has a full set of decals for a number of Allied units and comes with Bolt Action stat cards for game use, a new innovation from Warlord Games.

M8 / M20 Scout Car: Used by both the American and British armies from its creation, the M8 Greyhound was fielded as a lightweight armoured car rather than the anti-tank role it was originally designed for. It served as a reconnaissance vehicle, racing ahead of the main armoured force and spotting the enemy’s deployment for future exploitation.

Capable of reaching speeds above 55 miles per hour on roads and fast over hardened ground, the turreted version had a 37mm gun and a co-axial .30 calibre machine gun. Tactically, they were used in pairs, and were able to get themselves out of trouble

Included in the kit is the option to create the M20 version, an open-topped vehicle most often used as a command vehicle. It mounted only a .50 calibre machine gun but also carried a bazooka for some anti-armour firepower. The kit can be modelled with open or closed hatches, comes with a driver and a full set of decals.

M18 Hellcat: The new M18 Hellcat kit from Warlord represents the fastest tracked vehicle of World War II. Designed to hunt down and destroy tanks, its armour was too thin to face off against most Axis opponents and used its speed and agility to get out of trouble. When this ‘cat was on the prowl, it relied upon those same qualities to get into the right position to use its 76mm gun to good effect.

The crew of 5 had to contend with an open-topped turret but this provided an excellent level of all-around vision. The actual kit comes with a choice of gun and mantlet options and two crew, plus has a highly detailed turret interior. There are also a set of decals that come with the kit to allow some finishing touches, plus a Bolt Action stat card and, a nice touch, a number of damage markers for use during games.

These three kits are perfect for use together in a US or Allied force, possibly as a combined reconnaissance force during a Bolt Action: Tank War game or supporting infantry during the Normandy landings or the Battle of the Bulge. Equally, they could feature in any Allied army due to Lend-Lease or even, with the Scout Car and M18 Hellcat, they could be fielded in a Post-WW2 army in South America or Africa. Great kits, with some good options and yet more evidence of an excellent partnership between Italeri and Warlord Games.