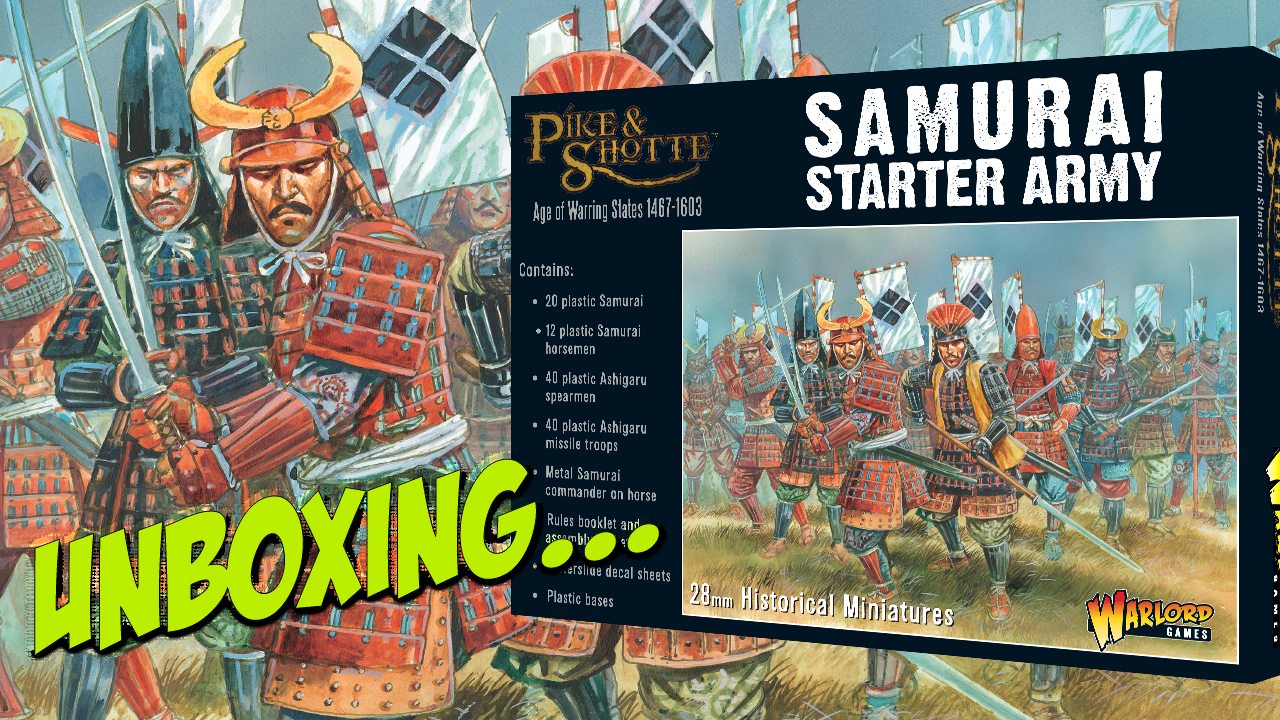 Warlord Games continue to expand their range of Starter Armies, and one of the latest in their Pike and Shotte range is for the Samurai, specifically the Warring States 1467-1603.

You can read the text from our video unboxing below.

Like most of their starter sets, it’s a big bugger, weighing in at 1.2 kilos and containing 125 miniatures.

So, lots of plastic in here, but we start by looking at the mounted metal commander, unique to this set.

On to all those plastic sprues now, and we begin with one of the Samurai horsemen frames. There are two of these in the set, allowing you to make 12 riders.

Below these we have the Samurai Foot Warrior frames. Each frame contains 10 heads and 12 torsos, 20 arms and 10 legs, allowing for the construction of 5 warriors from each frame, armed with either swords or spears.

There are 4 Samurai foot frames in the box. A total of 20 warriors can be made from these.

Flicking back over the other side of the box, lets have a look at the frames for the horse. There are six horses on each of the two animal frames, although the poses are similar there are what looks like at least four different variations.

The bulbous things on the right are Horo cloaks, which as well as providing clothing and protection, signify the samurai status on the battlefield.

This next sprue is one of 8 Ashigaru Speamen frames. Each frame allows for the creation of 10 models, 6 of which can be armed with spears, the other 4 being an officer, standard bearer and two man drummer team.

You can construct a total of 40 Spearmen using these 8 frames.

The last of the figures are the Ashigaru Missile Troops. Again you can make a total of 40 warriors using these eight frames. Each sprue contains 4 bows and 4 arquebus. With the fifth other figure on the spure being either an officer or ammunition carrier.

Excluding the mounted metal general, all of the figures in this set are available elsewhere and existed in a previous incarnation as Wargames Factory figures, however Warlord Games have taken the time to remaster the frames and have done a great job of improving on the figure range they aquired, rather than just re-releasing without an further effort.

At the bottom of the box we find enough bases for all your figures – as long as you want to multi-base them….

And information sheets on all the figure types included. All of these figures are available in their own individual box sets, so these are the same sheets you will find in there.

Lastly we come to another Starter Set specific item – The Armies of the Daimyos (DIE-ME-OH’S) booklet by Tim Greene.

Oh, and here’s the base for the general hiding in the bottom.

Let’s have a final look at all the components you get in the Samurai Starter Set, which retails at £75 in the UK and $120 in the US. There are a total of 125 figures in box so, excluding the extras like the booklet and decals the figures work out at around 60 pence or 96 cents each.