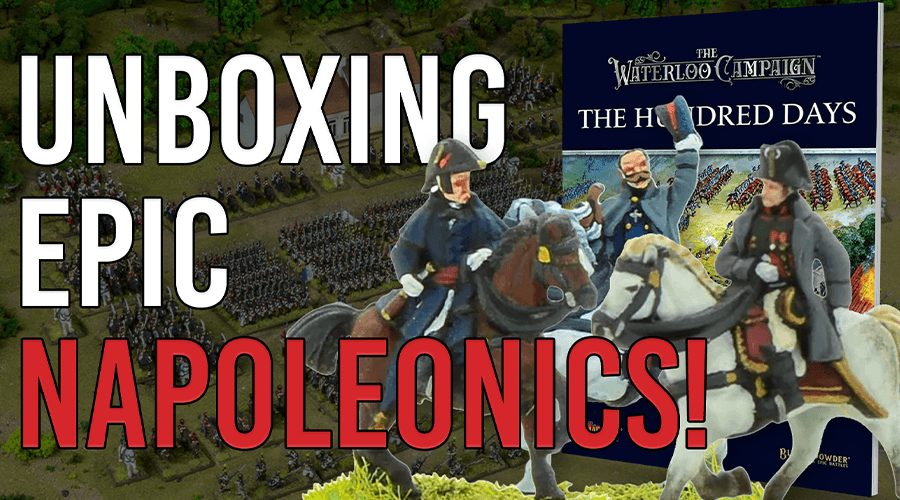 Taking a look at the rulebook, figures, and casualty tokens, Editor Dan unboxes and reviews the Epic Battles: Waterloo – The Hundred Days bundle from Warlord Games.

Here at Wi, we bought into the whole Epic gaming concept when Warlord released their American Civil War set back in 2019 so we were pleased to see it expand into the Napoleonic era with ‘The Waterloo Campaign’ last year, and even pleased to see that it continues to be supported with the release of new figures and printed material.

In this video, we are going to take a look at both the new book; The Hundred Days ‘new scenarios and rules’, and new figures in the form of Casualties and Commanders.

This neat little, A5 softback weighs in at 208 pages, just over half of which are scenarios, covering every major, and several minor, battles of the Hundred days campaign, which as the author points out in the intro is nominally the period spanning napoleon’s return to Paris from exile on the 20th March 1815, to the restoration of King Louis the 18th, on the 8th July that same year.

Our first scenario is The Action at Thuin, which although historically only formed a small part of the prelude to the Battle of Ligny, is cleverly used here by the author to ease the Epic gamer into the campaign and the layout of the book. Which we’ll take a closer look at here.

You will see that following a brief historical intro, we have ‘Playing the Battle’ which acts as the introduction to the game, followed by ‘The Set-Up’, ‘Deployment’ and any Special Rules. In this case, those are Night Fighting.

Victory Conditions for both sides then follow, and we conclude with – The Forces Involved.

This scenario structure continues throughout the book, it’s simple, clear and to the point and you will note the maps also benefit from those same qualities.

The scenarios take us all the way from Thuin to The Battle of Issy – the French armies’ final attempt to hold Paris, 14 days after Waterloo. Waterloo itself (which curiously gets no historical introduction) is divided into 8 battles; Hougomont, La Haye Sainte, Plancenoit etc.

We will now linger on the content page and entertain you with some mood music whilst you check out the complete list of scenarios.

The scenario section nears its conclusions with some rules for a Ladder Campaign. For those of you hardcore enough to play through every battle in the book, these few pages provide details of the effects of winning or losing a battle and how that affects the next game.

What if history had turned out differently? What if, for example D’Erlon’s 1st corps had appeared at Quatre Bras? This and two other ‘what if’ scenarios are outlined at the close of the scenario section.

Pick-up games are covered over the next two pages, with some pretty obvious rules for playing games without using a scenario.

Unit Size Revisions, Small Artillery Units and Tiny Units are Additional Rules covered over the next couple of pages… prior to two pages of New Units; these being Combined Grenadiers and Voltigeurs, plus Engineers of the Guard. The Engineers can be a unique unit or an upgrade, they have extra bonuses when they attack or defend builds or entrenchments.

We are then introduced to new French, British, and Prussian commanders, with their special campaign rules, before we turn to the Waterloo Campaign Orders of Battle.

These are presented in a different format to that which Black Powder players have become used to. Rather than duplicate the stats and special rules info from the Epic Rule Book, here we are provided with (clearly well researched) lists, covering the three main protagonists detailing division and brigade commanders, points, unit type and size information.

Moving from paper to plastic, or rather resin, we’ll now take a look at the latest figure releases in the Epic Napoleonic range. We have six very neat little boxes here, containing Commanders and Casualties.

Inside the first one, we have here five high-level officers of the Grande Armee, in fact, they don’t come any grander than ‘Old Boney’ himself. Instantly recognisable mounted on his horse, Marengo. Like all the commanders we are going to look at, he really is a great sculpt.

After flicking off a couple of bits of flash, we have a fine example of what Warlord are now able to achieve via their Siocast… sorry ‘Warlord Resin’ production.

I’m not a big fan of the horse’s painfully bent back leg, but as we take a look elsewhere on the models, in the French, Prussian and British Commanders set, it’s hard to find fault with the detail and likenesses on the models.

Turning to the casualty markers, again we have set for each of the three nations, with 18 tokens in each box. Before seeing them in the flesh I did wonder if there was some clever turny wheel device on the models to display the numbers, but actually, much more practically, there are 7 tokens displaying a number one, 6 displaying a two, three displaying a 3, and two engraved with a 4.

I like the fact there is a range of different troop types, and although the block paving around the edge won’t be to everybody’s taste I’m a fan of this extra detail. 28mm Black Powder players might also like to consider the tokens for their games.

A quick word on prices before I leave you to go and check your wallet.

So there you have it, Black Powder Epic Battles: The Hundred Days Campaign Bundle, in all its glory.