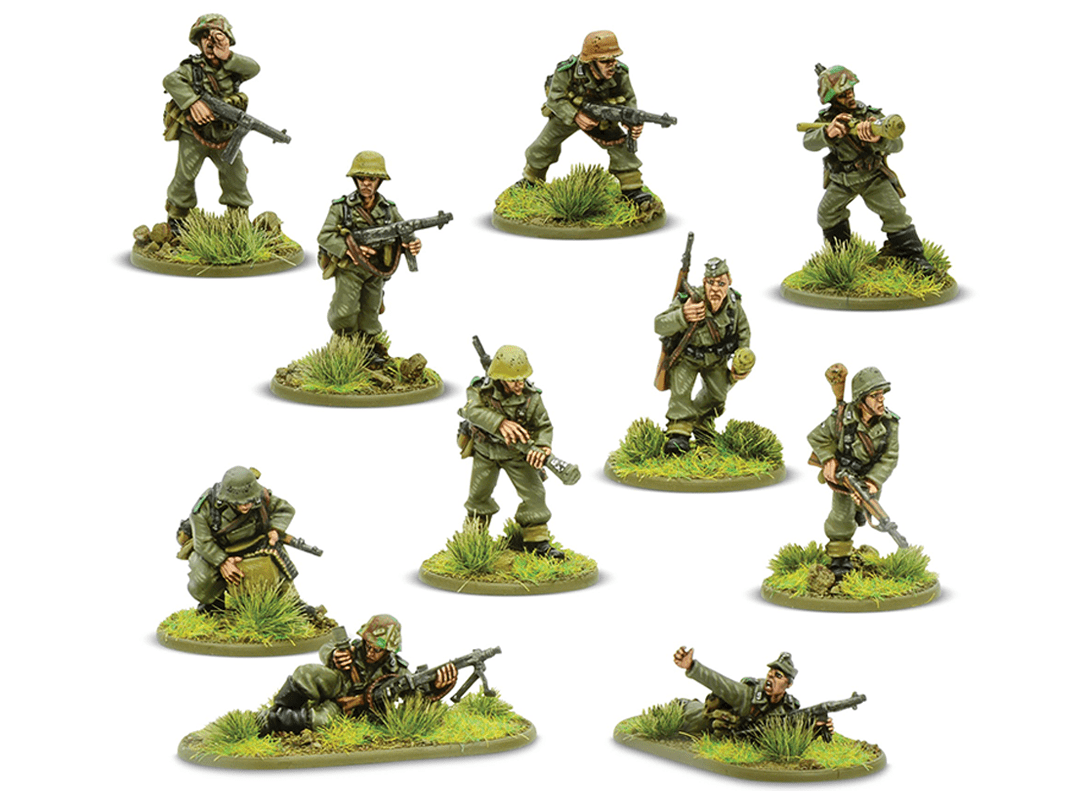 We open up this new set and have a good look at some of WW2’s most elite combatants – the Panzer-Lehr.

It seems like only last week we were talking about elite German troops from WW2 *checks the previous articles* and it was! This time we’re examining some Warlord Games Panzer-Lehr. Are they a good match/compliment for the Offensive Miniatures’ Waffen SS “Tank Hunters” that we already looked at?

At first glance there are many similarities – each pack contains ten figures, they are equipped primarily for anti-tank attacks, they’re 28mm scale, cast in metal, and come in a variety of poses. Both are known for their excellence on the battlefield too; the Panzer-Lehr Division – while it doesn’t have the notoriety of the SS – is arguably a more elite unit, with specialised, mechanised infantry, primarily made up of men from training and demonstration units with a great deal of battlefield experience.

So – elite for sure in terms of background. Do the figures have the same elite quality? Well, the first major difference between these Panzer-Lehr and the Offensive Miniatures SS (other than the fact that the Warlord set includes plastic bases) is that Warlord’s figures are very much in the heroic style. As with other Bolt Action releases the features here – faces and hands in particular – are larger. The weapons are far chunkier too; this will ensure the Panzer-Lehr fit in perfectly with other Bolt Action figures but have a slight mismatch against ‘more realistic’ ranges such as Offensive Miniatures, particularly with the weapon divergence. Check out the comparison pictures here to see the sizeable variation and keep it in mind if you’re considering mashing up your brands!

None of that is to say that the Warlord approach is wrong – it’s more the industry standard (thanks to the huge popularity of Bolt Action) and it’s a practical kind of difference. The sturdiness of the Panzer-Lehr, who remained fully intact after much handling (including gun barrels and entrenching tool handles), shows that those thicker weapons make for minis more suited to the rigours of tabletop gaming. They’re also a rather good-looking lot of figures in their own right with a fine mix of poses and a varied armament.

The first eye-catcher for us was the MG 42 team, one laying prone and gripping a grenade, the other carrying ammo and a load of gear. A great little scene within your squad on the tabletop.

After that, who can resist the appeal of four anti-tank warhead tubes? These look to be Panzerfaust 30s and the figures using them also have K98ks. They all hold their Panzerfäuste at different stages of firing: one has theirs slung over their shoulder as they run with K98k at the ready, one loosely carries their Panzerfaust, one has the end pointed down and is adjusting the firing lever, the last is raised up in a firing position. His Panzerfaust is propped on top of his shoulder area, rather than tucked into the nook of the arm as basic troops were instructed to do, and this quite nicely reflects the experience of the Panzer-Lehr.

The final four models have MP 40s (far chunkier than those on the Offensive Miniatures SS) and the poses range from prone to upright and at ease. These all come with a load of gear and a lot of character in the poses and faces.

If you’re the kind of Bolt Action gamer who only needed to see the words Panzer-Lehr Squad to envisage your panzergrenadiers nipping around the battlefield on half-tracks, ready to lay down fire wherever needed … well, you’re probably already rushing to the Warlord Games website to put in an order! Still need convincing? Check out Campaign D-Day: British & Canadian Sectors – in that book are special rules for Panzer Lehr armies including ‘Elite Leadership’. This rule means that when a Panzer-Lehr officer successfully passes an order check they discard D2 pin markers, rather than just the standard 1. Nice!