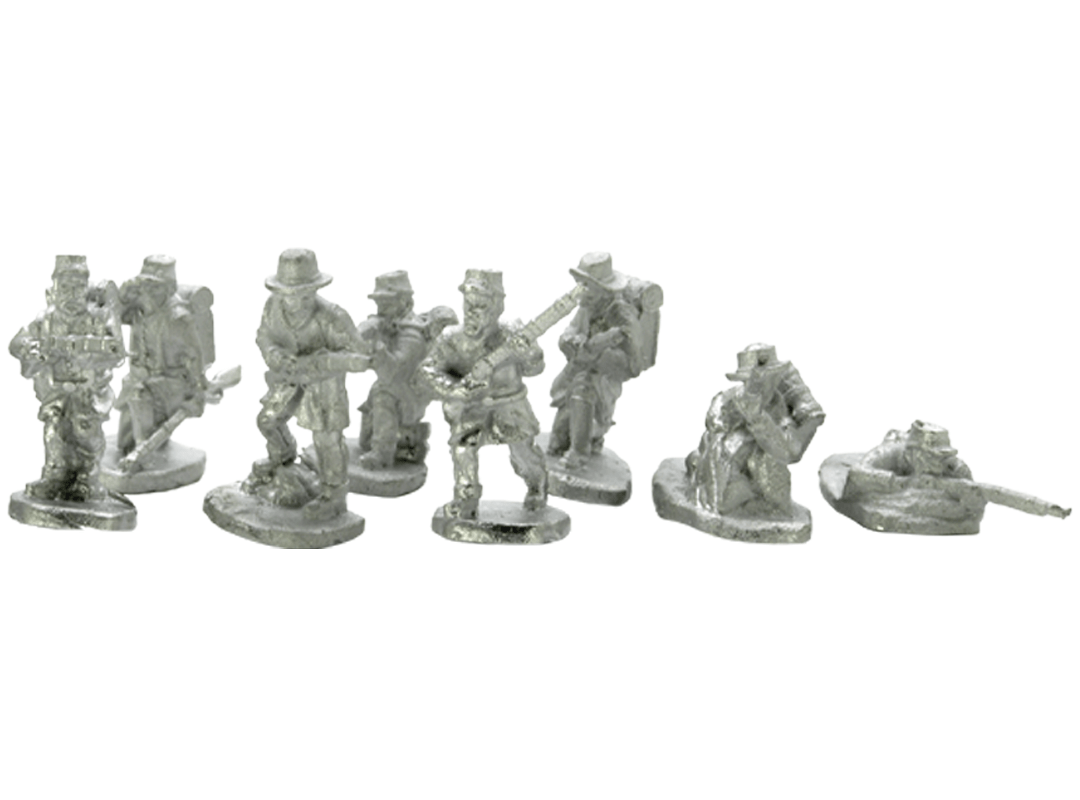 When the plastic Epic Battles ACW frame first arrived at the office it caused quite a kerfuffle (and much discussion) as we pored over the figures. Wargames Illustrated consensus was that they were rather good and, although slightly smaller than the norm at 13.5mm to the eyeline, would fit in well with existing ranges. Perhaps they might even give smaller scale ACW gaming a boost. The big unanswered question was what else would join the basic brigades and expand the range.

Well, about six months later, box sets for cavalry, Zouaves, and the Iron Brigade are already available, along with some good scenery options. Soon Dismounted Cavalry (which we’ll review soon) and a Skirmishers pack will join the fray. Let’s open up the Skirmishers set and cast our critical eye over the contents.

Within the box are 40 skirmisher miniatures and the Epic Battles bases you’ll need to mount them on. Thanks to their loose formation, with just four figures to a base, that will make 10 bases of troops in total or two complete skirmisher units.

The first thing that caught our attention is that although the box describes them as being produced in Warlord Resin, the set actually contains figures cast metal. The quality of casting is excellent here – clean and sharp – and though there are quite a lot of feeds in places they are mostly around the bases and clean up quickly and easily.

There’s some great figure variety in the set with ten variants ensuring no two bases need to look the same. Their poses range from upright to prone and some of the men are taking cover behind tree stumps and rocks. There are figures advancing, firing down sights, reloading, and observing the battlefield and that variety makes for a very dramatic final look. We really appreciate the care that’s been put into the figure positions – going above and beyond our expectations for sure.

Detail’s generally very good, helped by those aforementioned clean casts. Some of the elements within the set are a little unusual though. Seven of the ten variant figures are wearing their knapsacks which strikes us as a little unusual for skirmishers. Having loose formation skirmishers running about with chunky gear makes them look a little more like they were caught unawares as these men would usually leave that gear behind.

The selection of headgear a bit of a mix too, which is in keeping with the overall style of the range but might go against the ideal for some. There are seven figures with kepis, two with Hardee hats, and one with a slouch hat.

While we might have preferred the figures to be less weighed down by knapsacks we can’t fault the sculpting of that gear, nor the rest of them. This set will allow you to build a fine-looking lot of skirmishers to screen your other troops and are a very welcome addition to the Epic Battles range.