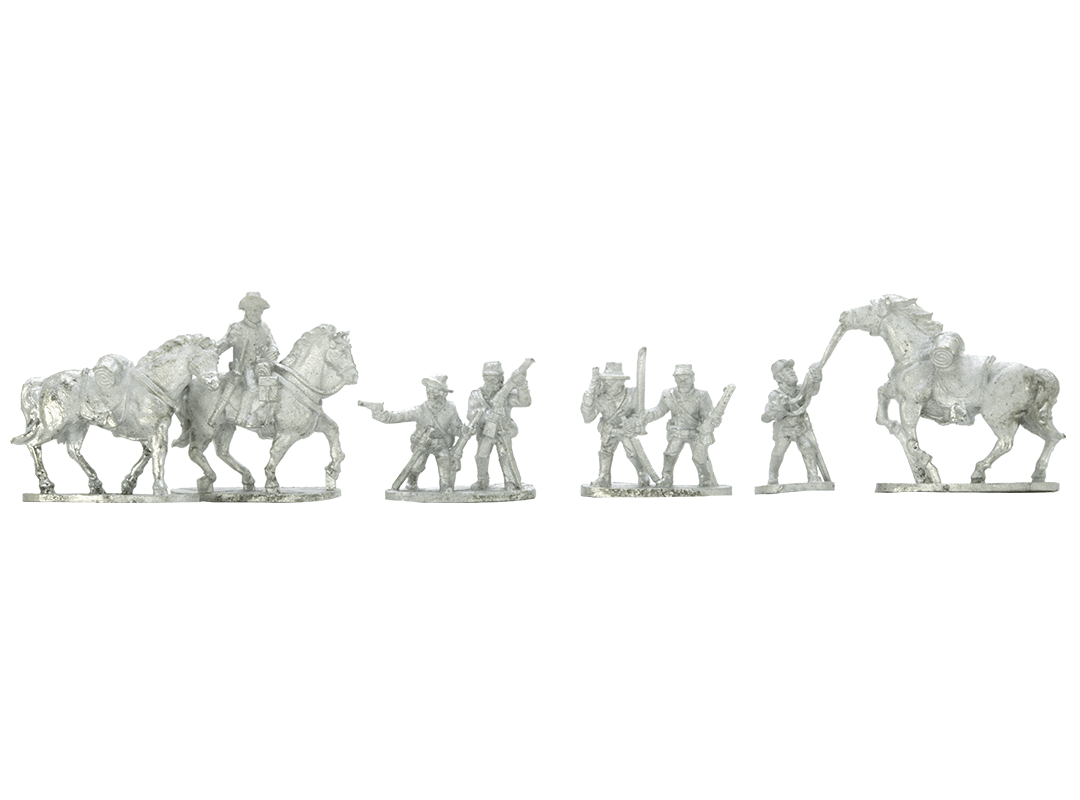 Following on from our look at the Skirmishers last week we are unboxing the Dismounted Cavalry for Black Powder Epic Battles.

Within the box are 54 dismounted cavalry miniatures and the Epic Battles bases you’ll need to mount them on. The figures come cast as groups of two which allows for variations on each base (six men to a base, so three actual groups of two figures) but speeds up getting your ranks together. The contents of the box, therefore, will allow you to put together a complete Dismounted Cavalry brigade of three infantry regiments – each of those comprises 18 men.

In addition, is a really appealing element of the set, there are three bases of horse holders. These each have a man and three horses on them to indicate the mounts that your brigade have left behind.

As with the Skirmishers, the box lists these figures as being cast in Warlord Resin, but the set actually contains figures in well-cast metal.

The infantry themselves look great and there’s an impressive amount of variety. Five different groups of figures are included for ten variant poses in all. They are armed with carbines and revolvers, as you’d want, and have some pretty hefty sabres. These weren’t small weapons in reality, of course, but the size of the blades have been upped quite a bit to read well in the scale.

What we really like are the horses and handlers. There are seven different horse variants from the nine included, which is going above and beyond the sort of variety we’d expect. They’re big horses too – impressive and at an imposing height. The one rearing, with the handler struggling to keep it under control, is a very nice addition.

This set costs £40 ($55 US) which isn’t a small investment when compared to the offerings from a company like Kallistra. For £6 ($8.50 US) you can get 16 Kallistra horses and 4 handlers as well as bases. For a further £12 ($17 US) you can add 64 dismounted cavalry. That’s more figures for less than half the price. We’re perhaps a little more partial to the overall look of the Warlord figures when it comes to sculpt quality but the Kallistra figures offer more specificity (with Union and Confederate alternatives) and certainly offer better value.

Kallistra (three centre) and Warlord Games (on either side) figures.