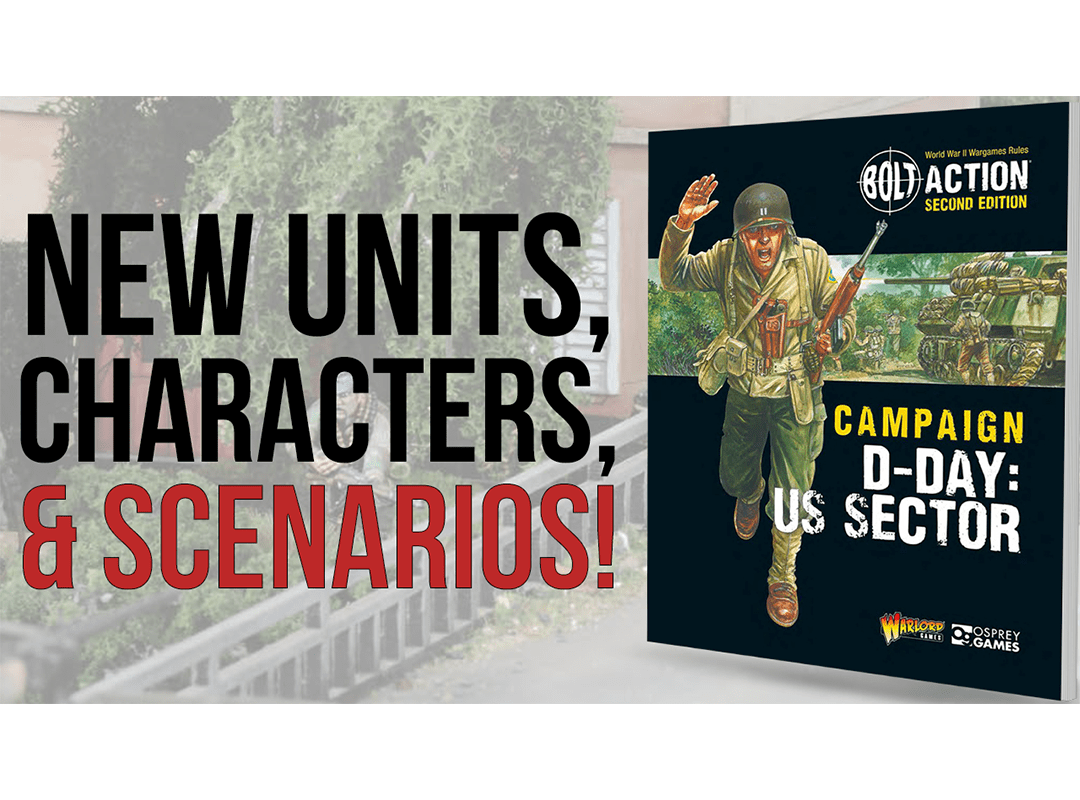 Campaign: D-Day: US Sector is the third and final book in the Bolt Action Second Edition D-Day Trilogy, following on the heels of the Overlord and British and Canadian Sectors.

The text below is a video transcript for those who prefer to read rather than watch.

The first passage of text in the book confesses that some of the material you will be seeing, such as units and special rules, have been seen elsewhere, but the book acts as a compilation of that and more. It offers Bolt Action players loads to get them into the US Sector during and after the D-Day Landings of 1944.

Should you need it, the next few pages of the book provide a very brief history of the D-Day operation from the US perspective, before we hit the first of 12 scenarios – The Battle of Graignes. In total the scenarios take up the first 60 pages of this 160-page book.

The Battle of Graignes is a fight between US paratroopers with light artillery and a SS recon force, with the US player deploying in the centre of the table.

Bolt Action players will instantly recognise the layout of the scenarios – Objective, Set Up, Special Rules, Forces, Deployment, Game Duration, and Victory which, are all covered.

Aftermath covers the historical aftermath of the action that is present in the scenario.

Stacked up behind The Battle of Graignes scenario are another 11 scenarios which move the action chronologically forward with the advancing US forces. The scenarios are interspersed with historical introductions to the arenas in which they took place.

Things conclude with Brest – The Assault of Fort Montbarley – a refight of the bloody assault on one of the old 18th Century strongholds which the German Fallschirmjager were hanging onto in September 1944.

In true Bolt Action Campaign book style, we then move onto ‘New Units’, of which there are two: Chaplains (with the ability to inspire friendly troops) and Intelligence Officers (an upgrade of regular front officers). Both these units have appeared in other books, so I’m guessing “new” means new to this sector.

A couple of pages of ‘New Rules’ brings Support Officers, Forward Observers, and a new Artillery Barrage table into US sector action.

Offering to help out your US forces on the tabletop are several new French Partisan units, including the Headquarters Jedburgh Team, Marquis Squad, Molotov Anti-Tank Squad, and Paris Police Prefecture Squad, all of which were active during different stages of the American advance and can offer a great deal of colour to your games.

We then have a couple of ‘New Characters’, before moving to ‘German New Units’ which include the Double Agent, Paris only security squads, and a couple of vehicles.

The next 18 pages of ‘New Theatre Selectors’ provides the US player with what they need to know about what forces they are allowed to field in their platoons and any special rules pertaining to them. This is followed by similar information for the German companies that the US forces came to grips with.

From this point onwards the book’s focus is on new armies. Leading the way are the US Army Rangers for 1942 – 45. Previously the Rangers were a squad option in the original Armies of the United States books, but in D-Day: US Sector they are a standalone army option, with their own officers, medics, mortars, etc.

As well as all the stats there are a couple of new interesting Ranger characters and ‘New Theatre Selectors’ with instructions on what Ranger elements can fight where.

‘The Tip of the Spear’ introduces New Units and New Theatre Selectors for the US Airborne. As with the Rangers, this expands on previous ‘squad option’ availability.

We now switch our attention from the Yanks to the Brits, with the new rules, stats and Theatre Selectors for the SAS in France.

Switching sides completely, we have two new army lists for the Germans. First up are the Fallschirmjager, which as the authors point out “in 1944 were extremely well trained, led and equipped”. German players will be spoilt for choice with both the Fallschirmjager and the following Waffen-SS options that are available to them in the US sector.

The book concludes with an appendix of Special Rules. I may be wrong, but I don’t think any of these are new – they just form a quick reference guide for those available to the forces within the book.

For further information on Campaign D-Day: US Sector, see the upcoming August 2021 issue of Wargames Illustrated magazine, where you will find a Designer’s Notes by the book’s two authors.