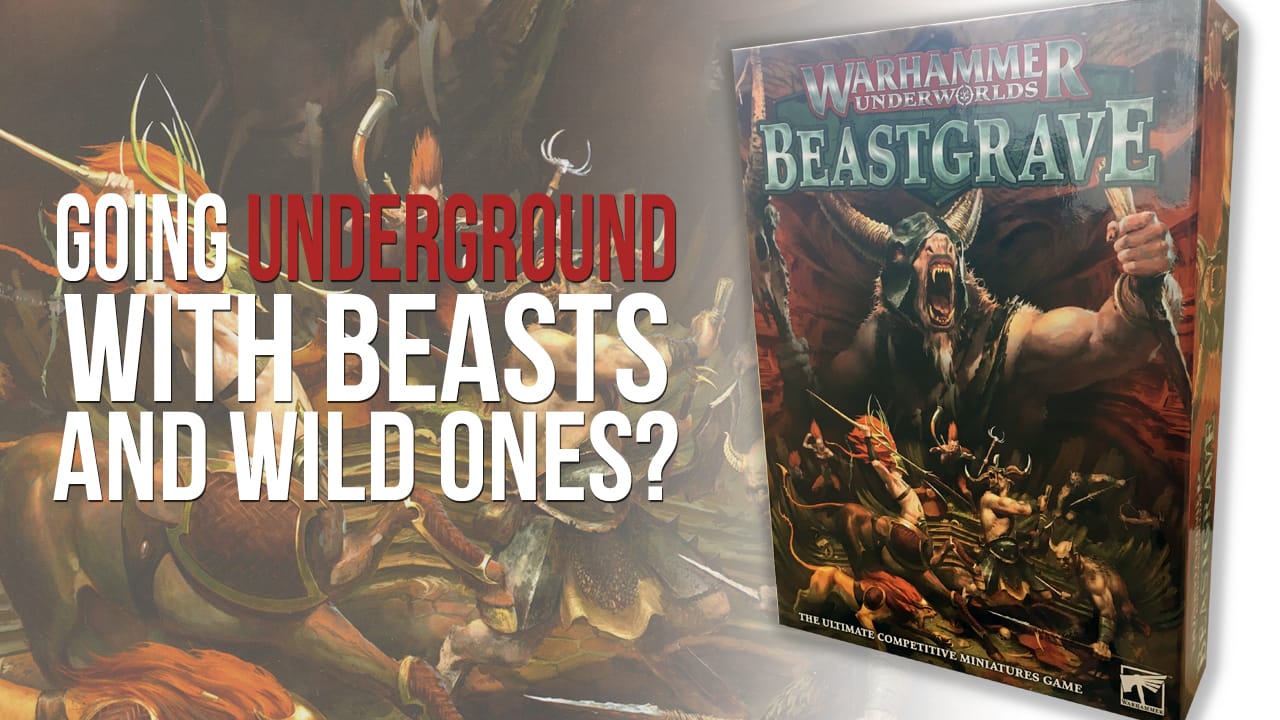 Games Workshop have a great many skirmish level rule systems on the market, but one of the most popular amongst competitive players is Warhammer Underworlds.

Warhammer Underworlds is a game of battling Warbands where the results of each game have a knock-on effect for the next. Designed with a ‘season’ of combat in mind, this is a campaign-driven system wherein a series of linked battles are fought, deep in a realm beneath the earth. The enemy combatants aren’t the only threat though, as the very battlefield itself is ‘alive’ with hazards. The latest supplement for this game is Beastgrave, which introduces two new Warbands and a number of new rules.

Lifting the lid of the typically sturdy box, we come upon three punchboards of tokens and hazard markers.  These are double-sided and cover all the possible needs for gameplay. One of the new items from the rulebook is the Guard token. This is used to place the members of a Warband on guard ‘duty’ around a key area or feature on the gameboard.

The two folding double-sided game boards are the next item in the box. These are made from durable, heavy gauge card, which may be placed side by side to produce a number of gaming locations. These locations correspond to the potential layouts detailed in the main rulebook, a series of subterranean areas which are marked with hexes for movement and can be ‘dressed’ with suitable markers and tokens.

Beneath the board comes the softback 39-page rulebook,  which adds additional material to the background behind the Underworlds ‘saga’, before taking you through the main rules system and the use of the various card decks, how to set-up and use the battlefields, the various phases, different action choices, the use of magic and some alternative rules for matched and ladder campaign play. Although this is a supplement or add-on to the Warhammer Underworlds game system, Beastgrave is a complete game in its own right, so players can pick up this boxed set and play through the scenarios presented.

In addition to the full rulebook, the game comes with an 8-page ‘Learn to Play’ booklet, a ‘quick start’ guide to get you started and aid with gameplay in the future. As if that wasn’t enough, further support materials are included, a double-sided assembly guide for the miniatures included with the set.

The frames of miniatures come next, suggesting that the layout of the box has been considered as you make each discovery. There are two plastic frames of miniatures, representing the two Warbands. The frames are molded in two different colours, with the Grashrak’s Despoilers Beastmen in brown and the Skaeth’s Wild Hunt Aelves. Both are multi-part figures in need of some assembly, but this isn’t too much of a trial due to the ease of assembly that is an integral part of the ‘GW Way’. The Skaeth’s Wild Hunt are a new addition to the world of Warhammer Underworlds, representing the remnants of the noble Wood Elves prior to the Age of Chaos and the tearing asunder of the Old World.

The character and game play cards are next. Part of the process of the game comes from a certain amount of ‘deck building’, offering another facet to the gameplay. The cards are clearly laid out and easy to use, with just the right amount of information without being crowded. The artwork and other imagery on the cards is also nicely evocative of the setting. The last couple of component groups in the box are the 6-sided combat dice, with symbols rather than numbers, and, a nice touch, a number of Ziploc bags designed to hold the tokens and other game materials during storage.

The quantity and quality of gaming materials in this product put other companies to shame. Everything you need is here, and this stand-alone game also enables expansion to the core and no doubt future releases for the Warhammer Underworlds system. Once again, GW sets a standard that others struggle to emulate.