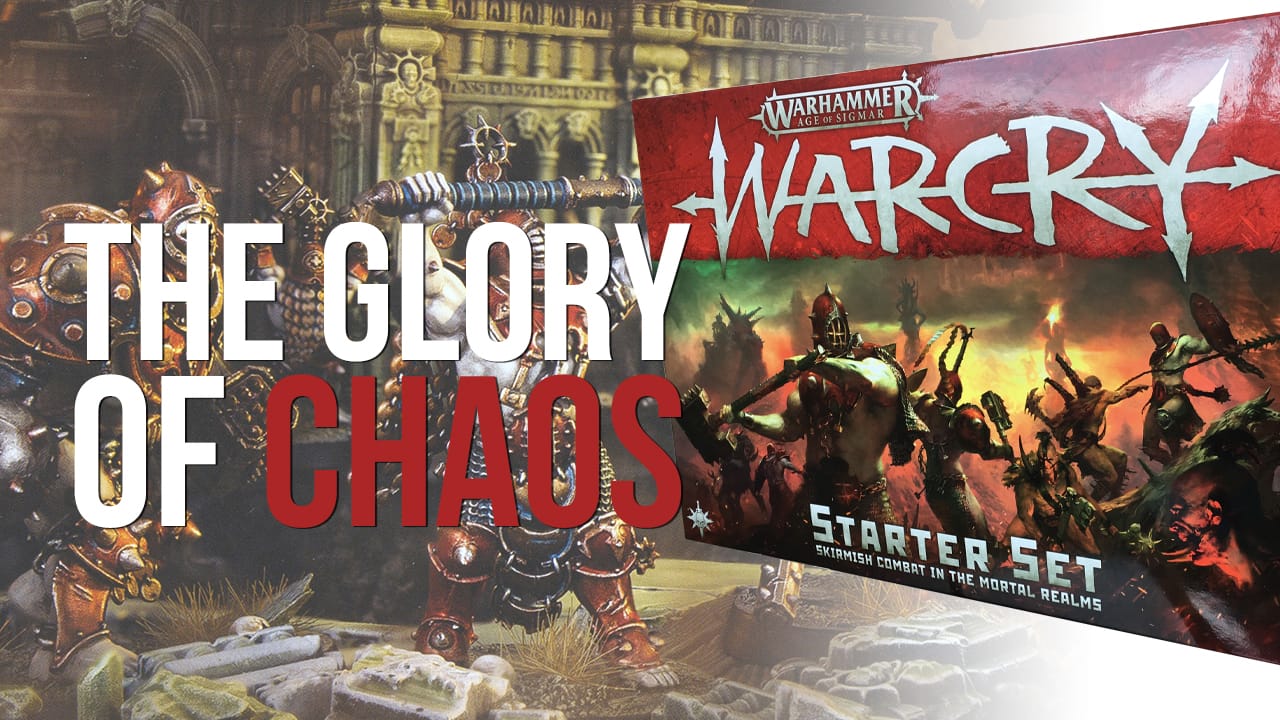 Games Workshop have produced a wide variety of different boxed games. Over the past few years, these have proven to be increasingly good value for money with regard to contents, with rules, models and terrain which may be used as part of the GW ‘universes’ or with other game systems. So, and here’s something I never thought I’d get to write, let’s take a look at one of the latest releases from Games Workshop, the fantasy skirmish game Warcry.

Even before you lift the lid of the sturdy box, the first thing you notice is the overall weight. This is a hefty box, packed to the gunwales with wargaming goodness. Inside, the first thing you come across is a veritable plethora of plastic goodness, all ready to be assembled. The frames allow you to field two different Warbands, 8 figures from the Iron Golems faction and 9 Untamed Beasts. Also included are beasts from the Realms of Chaos, 6 Furies and 6 Raptoryx, which can turn up as encounters during a game, or may be bonded to a Warband during a game or a campaign.

These are fantasy figures par excellence, with some well laid out frames containing all that is needed to create suitable figures. Granted, these are ‘heroic’ scale miniatures, in the ‘GW-style’, but are easy to assemble and full of the type of character that only Games Workshop seem able to achieve. The members of the Warbands are great, but the bestial creatures are excellent and all three sets of figures could do service with other rules.

The next ‘layer’ of plastic is equally useful for other purposes. One of the main selling points of most of the newer boxed sets from GW is the addition of plastic terrain that lets you get gaming right from the off. A fair amount of the box’s overall ‘heft’ comes from this high quality, durable hard plastic terrain. This could easily survive the vast majority of tabletop encounters, unless you’re adding an actual blowtorch to the mix! Again, this plastic is based upon the Games Workshop ‘aesthetic’ but could be used with a host of other fantasy or pseudo-historical settings. Gothic style ruins, caged skeletons, rotten floorboards, arcane symbols, corrupted wooden barricades, a bell tower and the detached head of a statue are all here. With some careful assembly, you can create a layout that can be moved around to form a variety of landscapes. In addition, much of the terrain has extra details that could perhaps be used as objectives during a game.

Beneath all that plastic, protected beneath a card poster, are the game rules and components. First, we have a punchboard full of double-sided tokens for use with the rules. These are gloriously full colour and printed on heavy duty card. To make the most of all that plastic terrain, the box also contains a double-sided 22” x 30” folding gaming board. Again, this is heavy duty, durable card, with two different designs.

The actual rulebook is a 161-page softback, which contains all the rules for the game, representing the core rules that act as the foundation of the concept. Various modes of play are on offer, including open play with multiplayer options for 3 or more players, using two different scenarios.  Next come the matched play rules, allowing gamers to field two roughly equal forces intended for tournament use. Finally, there is the option for campaign play, creating a Warband and playing out the story of their adventures across a number of encounters, complete with special quests to undertake during the course of a game.

Of course, you need to know what your fighter types can do during the course of a game, which brings us to the 20 fighter cards which cover the models found in the starter set. There are also 4 ability cards to enhance your warriors, plus terrain, deployment, victory and twist card decks which enable you to not only set up your games but add that random element to keep every game fresh, no matter how many times you try the same scenarios. The 18 ‘themed’ D6 add that all important randomisation that makes any game more than just chess. This starter set truly has all you could need, complete with measuring rulers, figure bases and even a collection of zip lock bags to keep all the various tokens and cards safe.

Overall, this is a well packaged starter set, which comes from a company which pretty much invented the concept of how to ‘do it right’ when it comes to the hobby. But it’s actually much more than that: this is great value for money, with hours of skirmish gaming before you really have to think about buying extra figures or terrain. Lesser companies still ‘short change’ the gamer by omitting some key element of a force or similar. GW go out of their way to put in everything you need to get gaming, then use far subtler techniques to sell more. A great product, from a true supporter of the hobby.