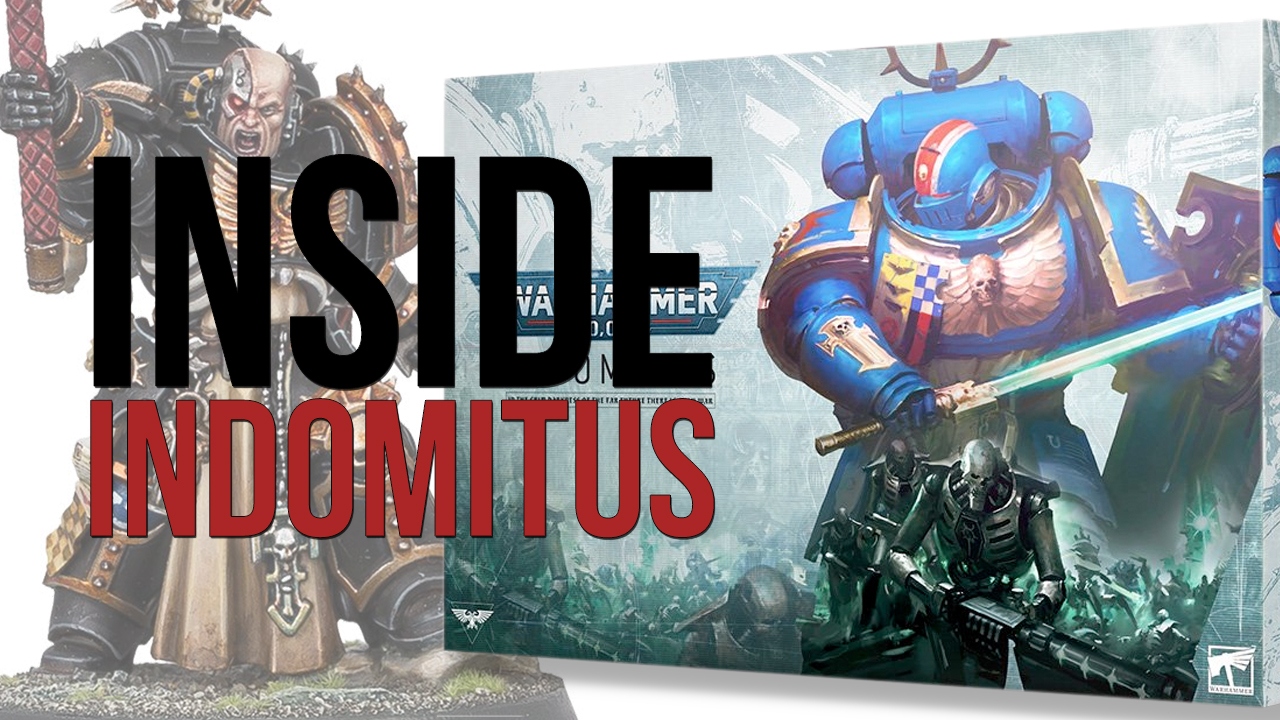 If you are a player of Games Workshops “Warhammer 40,000” then you will already be aware that this month sees’ the release of the latest edition of the rules. GW have decided to mark the event with the launch of what they are describing as “the biggest and best boxed game we have ever released.”

Named “Indomitus” it is certainly a hefty box; it is sturdy and decorated with the fantastic artwork we have come to expect from Games Workshop. But what do you get inside

Below is a transcript of the video, for those who prefer to read then watch.

When you take the lid off you find a card insert decorated with inspirational 40K artwork. GW have used these to separate the sections within the box rather than use plain card which is a nice touch.

Having removed the first card insert you are confronted with layers of plastic frames, containing enough miniatures for two 40K armies; the Space Marines and the Necrons. Both armies contain basic troop types, such as the Marine Intercessors or Necron Warriors, but also the more unusual units, such as Marine outriders on motorbikes or the Necron Scarab Swarms. Also included are Leaders as well as the specialist models, such as a Marine Chaplain and Necron Plasmancer. With 24 Marines and 37 Necron models, including motorcyclists and the huge Necron “Con-op-tek Reanimator,” the number of models included in this box is impressive and GW have certainly not cut any corners here in providing everything you need for a balanced force.

All of these miniatures maintain the high standard of detail and dynamic poses that have become the trademark of Games Workshop products. You only have to look at the detail in the scenic base provided for the Marine Commander, for example, along with the detail on his shield and armour to know that this is a quality product.

It is also worth noting that these miniatures are all “push fit” meaning that no glue is required to build them, making them ideal for young hobbyists or those new to wargaming, as mistakes can be rectified. Old hands will probably seal these joins with plastic glue anyway.

Removing the second card insert reveals even more goodies underneath.

As you can see, the left and right card sections contain all the necessary bases for the plastic miniatures, divided into different sizes for the different units. These are bagged separately although some of the character models do have scenic bases attached to their sprue as well.

The centre section contains a sealed plastic wallet with The Edge of Silence Booklet, a transfer sheet for the miniatures and a hard back copy of the new 40K rules.

The plastic wallet actually contains two booklets, the first being the Edge of Silence campaign book and the second the assembly guide for the plastic miniatures.

Essentially, the scenario for this campaign revolves around a spearhead force of Space Marines being sent to explore an “eerily silent “region of space known as the Pariah Nexus. The Edge of Silence sets the scene, describing the Pariah Nexus and the background to the Crusade before providing the game stats and organisational details of the opposing forces.  Full details are provided of the special abilities and ‘in game’ stats for every unit that comes in the “Indomitus” boxed set, allowing you to begin gaming straight away without having to wait for each factions new army book to be released.

The assembly instructions are broken down into sections for each different type of miniature and include clear, colour coded pictures showing how the models fit together. Although there is no written text, the pictures are very simple to follow and include suggestions for painting and adding transfers to your troops.

The box also includes a hardback copy of the new 40K rulebook. Weighing in at over 360 pages this is a weighty tome that contains everything you need to start playing.  A summary of the new game and how it plays compared to previous incarnations of 40K is probably best left for another review, but the rulebook itself is glorious. It is packed with full colour pictures of well painted miniatures as well as the inspirational artwork players have come to associate with this game.

The dark, brooding nature of 40K warfare is not only conveyed by the art but also by the background story and flavour text that really is unique to the 40K setting. The high quality production is clear from start to finish, making this a great book just to flick through and enjoy. It is worth noting that the cover for this book is unique to the “Indomitus” boxed set, apparently, and when the rulebook goes on general sale the cover will be different.

Finally, the box contains a flyer for Gav Thorpes new book, based on the “Indomitus” setting, and a sheet of decals or transfers. The decals allow you to turn your Space Marines into different chapters, with transfers for Blood Angel’s, Space Wolves, Dark Angels and Ultramarines all provided here.

Overall, this is an excellent boxed set. GW have really thought about its contents and tailored them to suit both complete beginners to the hobby as well as experienced gamers who just want an entry into 40K games.

The blurb on the Games Workshop website also claims that there is a saving of over 50% if you buy this boxed set rather than buying its contents individually and, if that is the case, this box represents great value for money as well.