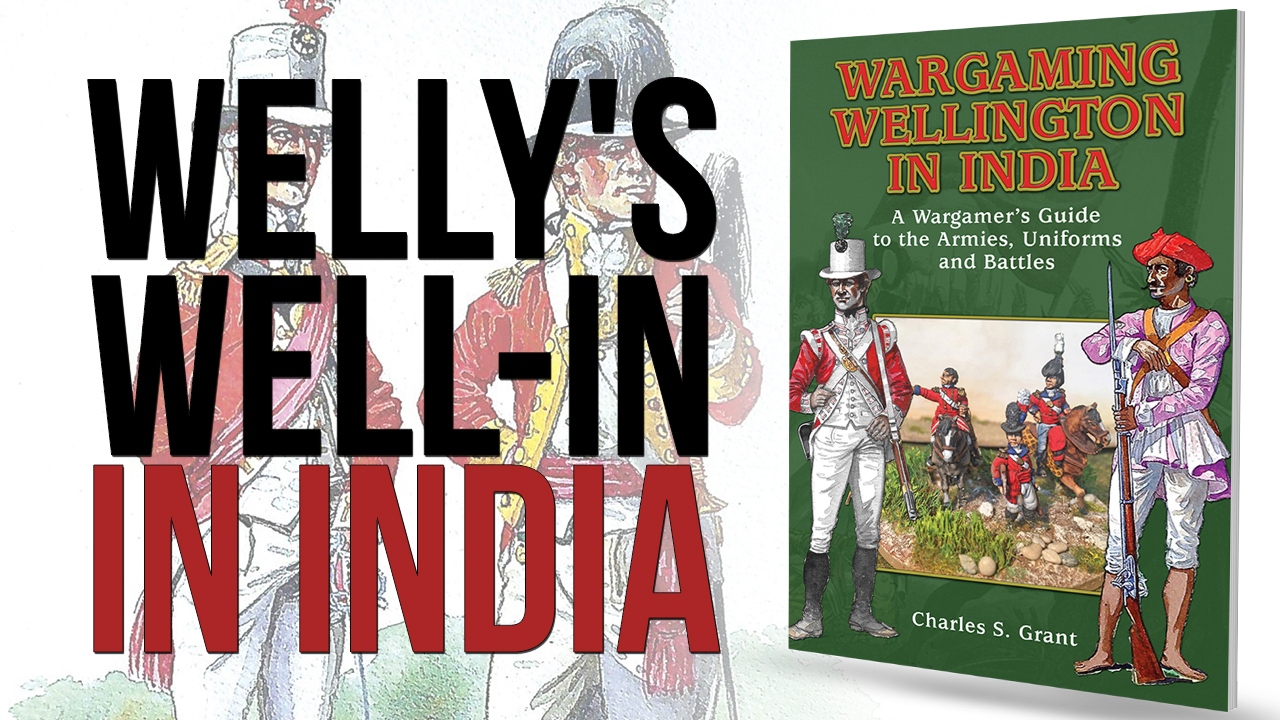 The latest book by Charles S Grant deals with an often-overlooked period in the career of Arthur Wellesley, the Duke of Wellington. Published by Partizan Press this 145-page hardback book is well produced, with most of its prints and illustrations presented in full-colour.

The below text is a transcription of the above video, for people who prefer to read than watch.

The first chapter provides an overview of the British campaigns in India, detailing the First Anglo-Maratha War and the Mysore Wars, before concluding with the Second Maratha War (in which Wellesley actually commanded).

I liked this approach as it put Wellesley’s campaign into its historical context whilst also pointing the wargamer to other potential conflicts in which he or she could use their Anglo-Indian armies, if so inclined.

Chapter 2 details the British (or, more correctly, the East India Company forces) involved in the war. The author devotes 35 pages to detailing the uniforms and organisation of the British and Indian forces and these are illustrated with glorious colour prints of the units involved.

Mostly the work of Bob Marrion, the prints are characterful and detailed, and are exactly what a wargamer looks for in a book like this.

Tables are provided detailing the facing, lace and waistcoat colours of the various regiments involved, whilst cavalry and artillery are equally well covered. There are some great uniforms on display here and an East India Company army would look splendid on the tabletop.

The third chapter moves on to discuss the Indian armies of the Marathas and the Sultan of Mysore. Dress, organisation and weaponry of the forces are discussed and once again the text is accompanied by colour plates illustrating the units discussed. Cavalry, infantry and artillery are all covered in detail as are the more colourful troop types such as “Camel Rocketeers”.

Chapter four details the battles of the Third and Fourth Mysore Wars and the later Second Maratha War, in which Wellesley won his famous victory at Assaye.

Each battle is given a brief synopsis, usually accompanied by a map, and then orders of battle for the campaign.

Assaye itself is covered in greater detail and has a full order of battle included.

Chapter five provides a short introduction to the tactics of the period and how they differed from the tactics practised in Europe.  This runs to only three and a half pages and I think I might have preferred slightly more detail here, along with some rules suggestions to add period flavour.

The next chapter presents a series of colour photographs of miniatures from the period as well as a number of photographs of wargames in action. The book concludes with a few pen picture biographies of the key personalities involved in the campaigns as well as a Bibliography to point the reader toward further reading material.

Given that this is a book designed for wargamers, the absence of any wargames scenarios seems like an odd decision. Although I am always keen to look at wargaming eye candy, I think I would have preferred fewer pictures in Chapter 6 and perhaps a few scenarios or wargames ideas.

That said, the uniform and organisational detail provided in this book is excellent and the colour plates alone make this an essential purchase if you are considering campaigning with Wellington in India.